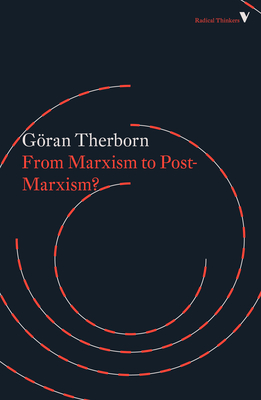 From Marxism to Post-Marxism? (Radical Thinkers)

In this pithy and panoramic work—both stimulating for the specialist and the accessible to the general reader—one of the world's leading social theorists, Göran Therborn, traces the trajectory of Marxism in the twentieth century and anticipates its legacy for radical thought in the twenty-first.

Praise For From Marxism to Post-Marxism? (Radical Thinkers)…

“Impressive … with a finely tuned style of analysis and judgment.”
—Guardian

“One could not hope for a better guide for the arduous journey still to come.”
—Mediations

“Regular readers of the New Left Review will find in this book many of the traits associated with that journal: a broad—sometimes Olympian—sweep; a level-headed combination of radical critique and sober analysis; a dialectical conception of society as a ‘totality,’ irreducible to this or that social-scientific discipline.”
—Ian Cummins, Monash University, Melbourne

Göran Therborn holds the Professor Emeritus of Sociology at the University of Cambridge. His works have been published in at least twenty-four languages and include works such as Inequalities of the World; Asia and Europe in Globalization; and Between Sex and Power.
Loading...
or
Not Currently Available for Direct Purchase