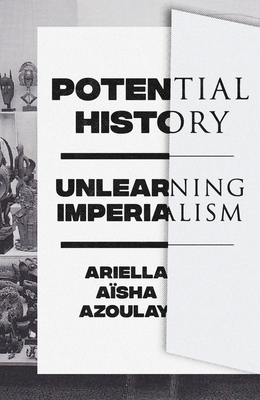 A passionately urgent call for all of us to unlearn imperialism and repair the violent world we share, from one of our most compelling political theorists

In this theoretical tour-de-force, renowned scholar Ariella Aïsha Azoulay calls on us to recognize the imperial foundations of knowledge and to refuse its strictures and its many violences.

Azoulay argues that the institutions that make our world, from archives and museums to ideas of sovereignty and human rights to history itself, are all dependent on imperial modes of thinking. Imperialism has segmented populations into differentially governed groups, continually emphasized the possibility of progress while it tries to destroy what came before, and voraciously seeks out the new by sealing the past away in dusty archival boxes and the glass vitrines of museums.

By practicing what she calls potential history, Azoulay argues that we can still refuse the original imperial violence that shattered communities, lives, and worlds, from native peoples in the Americas at the moment of conquest to the Congo ruled by Belgium's brutal King Léopold II, from dispossessed Palestinians in 1948 to displaced refugees in our own day. In Potential History, Azoulay travels alongside historical companions—an old Palestinian man who refused to leave his village in 1948, an anonymous woman in war-ravaged Berlin, looted objects and documents torn from their worlds and now housed in archives and museums—to chart the ways imperialism has sought to order time, space, and politics.

Rather than looking for a new future, Azoulay calls upon us to rewind history and unlearn our imperial rights, to continue to refuse imperial violence by making present what was invented as “past” and making the repair of torn worlds the substance of politics.

“A remarkably rich and evocative history on the problem of violence and the importance of engaging aesthetics.”
—Brad Evans, Los Angeles Review of Books

“Azoulay has produced a unique handbook for the 2020s that details how, why, when and where to say no in the affirmative. Her greatest achievement is that, against the foreshortened horizons of a despoiling barbarism, she makes all our tomorrows thinkable.”
—Guy Mannes-Abbott, Third Text

“Compelling … As in her previous work, the tools Azoulay proposes are powerful precisely because of the way they implicate the faculty of imagination as a challenge to seemingly incontrovertible histories.”
—Ian Wallace, Artforum

“An important read on the topic of museums, colonialism, and their clear relationship.”
—Hrag Vartanian, Hyperallergic

“Potential History is not only about the past, but about the enormous possibilities of the present.”
—Sabrina Alli, Guernica

“Ariella Azoulay takes on the seemingly impossible task of teaching us how to unlearn: unlearning imperialism, unlearning the archive, unlearning our complicity with regimes of violence, domination and exploitation, and most importantly for this ambitious volume, unlearning photography and its capacity to foreclose ‘potential histories’ that must urgently be realized and reclaimed. The monumental implications of unlearning are revealed with dizzying effect through her rigorous analysis, lucid writing, and vivid examples. In Potential History, she once again delivers a work of breathtaking scope that challenges us to reconfigure both what constitutes history, as well as what it means to learn from and unlearn toward its radical potential for living otherwise.”
—Tina Campt, author of Listening to Images

“A magisterial call to reorient our relations to objects, archives, art, and plunder.”
—Protocols

“Offers revitalising approaches to imperialism and to photography as a cultural phenomenon, grounded in the re-cognition of the figures ‘leaning against the edge’ of photographs.”
—Louis Rogers, review31

“Azoulay has produced a unique handbook for the 2020s that details how, why, when and where to say no in the affirmative. Her greatest achievement is that, against the foreshortened horizons of a despoiling barbarism, she makes all our tomorrows thinkable.”
—Guy Mannes-Abbott, Notes From a Fruitstore

“Across some six-hundred pages, Azoulay accomplishes that rare thing wherein her call becomes more urgent and acutely resonant even as the contours and magnitude become less perceivable and more outsized.3 By the book’s end, she has thoroughly denaturalized the terms of political classification and made the claim for a worldly sovereignty beyond the nation-state.”
—Luke Urbain, University of Wisconsin-Madison, InVisible Culture

“By creating a ‘potential history,’ Azoulay questions the imperialist construction of time, space, and politics through objects and experiences of struggles around the world, from the original peoples in the Americas, to the Congo under King Leopold II.”
—The Architect’s Newspaper

“A political call to arms that argues the need for critical examination of archive material … provocative and stimulating.”
—Sean Sheehan, The Prisma

“Much of Potential History’s 500 pages bear particular relevance to this moment of racial reckoning and faltering of neoliberal capitalism. As mass movements mobilize in the streets against anti-Black police brutality, white supremacy, and systemic, structural racism, her call for reconceptualizing ‘the strike’ to include historians, artists, photographers, museum workers, and ‘the governed’ seems poignant.”
—Stephen Sheehi, Hyperallergic

“To acknowledge the violence inherently embedded in archives—particularly in cultural archives that the neutral we understand as our cultural commons—and to then envision new ways of being with these cultural objects so as to allow them to speak their own futures are essential components of [Azoulay’s] urgent project of unlearning imperialism.”
—Rachel Stevens, World Records Journal

“Building from Azoulay’s argument that our actually existing commons—whether they are water systems or cultural archives—are constituted by imperial violence, we should ask how to transform imperial public spheres and institutions into worldly spaces of care and interdependence.”
—Kareem Estefan, World Records Journal

“A codependent politics of appearance…manifests as superficial investment in others’ problems, often to satisfy the emotional needs of the voyeur. This mode of despotic empathy has displaced the sharing of a world-in-common—precisely what, in Ariella Aïsha Azoulay’s wording ‘was destroyed and should be restored’—with ubiquitous spectacles of privation and racialized violence.”
—Irmgard Emmelhainz, World Records Journal

“The book reads as though it were composed by Walter Benjamin’s ‘Angel of History,’ who backs, horrified into the future while in front of him the ruins pile up. The angel, in this case, is the citizen, forced into the position of a perpetrator and trying to unwind history, to undo it not to return to a ‘golden age,’ but to do away with traditional chronological thinking altogether.”
—Margaret Olin, Political Theology

Ariela Aïsha Azoulay is a professor of Comparative Literature and Modern Culture, and Media at Brown University, as well as a curator and documentary film maker. Her many books include The Civil Contract of Photography and Civil Imagination: A Political Ontology of Photography, and she has curated exhibits for galleries and museums around the world.
Loading...
or support indie stores by buying on