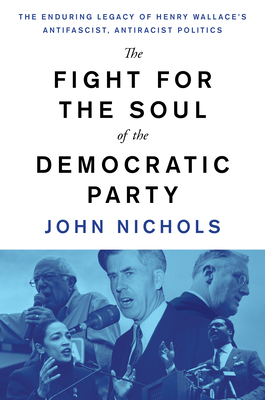 Seventy-five years ago, Henry Wallace, then the sitting Vice President of the United States, mounted a campaign to warn about the persisting "Danger of American Fascism." As fighting in the European and Japanese theaters drew to a close, Wallace warned that the country may win the war and lose the piece; that the fascist threat that the U.S. was battling abroad had a terrifying domestic variant, growing rapidly in power: wealthy corporatists and their allies in the media. Wallace warned that if the New Deal project was not renewed and expanded in the post-war era, American fascists would use fear mongering, xenophonbia, and racism to regain the economic and political power that they lost. He championed an alternative, progressive vision of a post-war world-an alternative to triumphalist "American Century" vision then rising--in which the United States rejected colonialism and imperialism.

Wallace's political vision - as well as his standing in the Democratic Party - were quickly sidelined. In the decades to come, other progressive forces would mount similar campaigns: George McGovern and Jesse Jackson more prominently. As John Nichols chronicles in this book, they ultimately failed - a warning to would-be reformers today - but their successive efforts provide us with insights into the nature of the Democratic Party, and a strategic script for the likes of Bernie Sanders and Alexandria Ocasio-Cortez.

Praise For The Fight for the Soul of the Democratic Party: The Enduring Legacy of Henry Wallace's Anti-Fascist, Anti-Racist Politics…

"Every progressive must read this book. John Nichols reminds us that Henry Wallace was the true heir to Roosevelt’s New Deal. He stood up against militarism, championed health care as a right, and fought for racial justice. When the party bosses denied Wallace a place on the Democratic Party’s 1944 ticket, they chose caution over a bold vision for ‘winning the peace’ with an Economic Bill of Rights and the Four Freedoms. As Nichols reveals, that set a pattern for compromise that sold the party and the nation short. Now, seventy-five years later, as progressives again fight for the soul of the Democratic Party, Nichols gives us the history and vision for a new progressive era."
–REPRESENTATIVE RO KHANNA

"Henry Wallace is a political figure—one of the giants of the mid-twentieth century—who has kind of been pushed out of the national political discussion … Nichols [tells us] that one of the reasons Wallace was not renominated in 1944 was because of his opposition to racism. The segregationists didn’t want him around."
–SENATOR BERNIE SANDERS

“More than a history book—this is an examination of what progressives must do to retake our democracy. Nichols points the way toward how we can build a party based on peace, liberty, and justice for all.”
–REPRESENTATIVE ILHAN OMAR

“Nichols is a remarkable thinker and writer. He recognizes that fights that were not won in the past by advocates of economic and racial justice and peace can now be won—if we are determined enough, and hopeful enough, to carry the struggle forward.”
–REVEREND JESSE JACKSON

“Nichols is so good at exploring the roots of U.S. radical politics, including our long socialist history. He puts the fights we’re in now into perspective—and gives us inspiration to carry on.”
–MARIA SVART, National Director of Democratic Socialists of America

“Henry Wallace thought we could avoid the Cold War internationally and work on addressing racism at home. He was ahead of his time, and he was punished for that. Maybe, now, we can recognize he was right about a lot of things.”
–NOAM CHOMSKY

John Nichols is the Washington correspondent for The Nation magazine, a contributing writer for the Progressive and In These Times, and the associate editor of Madison, Wisconsin's Capital Times. He's the author of several books, including The Death and Life of American Journalism, The Genius of Impeachment and The "S" Word.
Loading...
or support indie stores by buying on