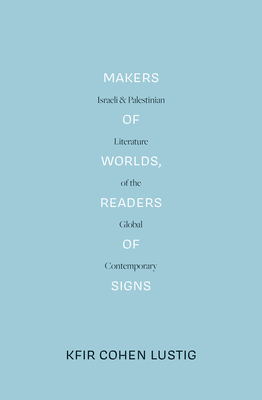 Makers of Worlds, Readers of Signs

Israeli and Palestinian Literature of the Global Contemporary

A sweeping new theory of world literature through a study of Palestinian and Israeli literature from the 1940s to the present.

Makers of Worlds, Readers of Signs charts the aesthetic and political formation of neoliberalism and globalisation in Israeli and Palestinian literature from the 1940s to the present. By tracking literature’s move from making worlds to reading signs, Cohen Lustig proposes a new way to read and theorise our global contemporary.

Cohen Lustig argues that the period of Israeli statism and its counterpart of Palestinian statelessness produced works that sought to make and create whole worlds and social time, from the creation of the new state of Israel to preserving collective visions of Palestinian statehood.

During the period of neoliberalism, after 1985 in Israel and the 1993 Oslo Accords in Palestine, literature turned to the reading of signs, where politics and history are now rearticulated through the private lives of individual subjects. Here characters do not make social time but live within it and inquire after its missing origin. Cohen Lustig argues for new ways to track the subjectivities and aesthetics produced by larger shifts in production. In so doing, he proposes a new model to understand the historical development of Israeli and Palestinian literature as well as world literature in our contemporary moment.

With a preface from Fredric Jameson.

Praise For Makers of Worlds, Readers of Signs: Israeli and Palestinian Literature of the Global Contemporary…

“It is refreshing to read an analysis of Israeli and Palestinian literatures that centers not on identity—national, religious, ethnic, or gender—but rather on the effects of capitalism on politics and culture.”
—Danielle Drori, Los Angeles Review of Books

Kfir Cohen Lustig is a Senior Research Fellow and Academic Director of the Globalization and Sovereignty Cluster at the Van Leer Jerusalem Institute.
Loading...
or
Not Currently Available for Direct Purchase