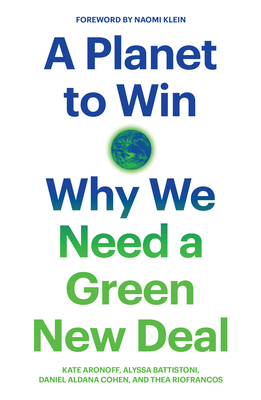 A Planet to Win

Why We Need a Green New Deal (Jacobin)

The age of climate gradualism is over, as unprecedented disasters are exacerbated by inequalities of race and class. We need profound, radical change. A Green New Deal can tackle the climate emergency and rampant inequality at the same time. Cutting carbon emissions while winning immediate gains for the many is the only way to build a movement strong enough to defeat big oil, big business, and the super-rich—starting right now.

A Planet to Win explores the political potential and concrete first steps of a Green New Deal. It calls for dismantling the fossil fuel industry and building beautiful landscapes of renewable energy, guaranteeing climate-friendly work and no-carbon housing and free public transit. And it shows how a Green New Deal in the United States can strengthen climate justice movements worldwide. We don’t make politics under conditions of our own choosing, and no one would choose this crisis. But crises also present opportunities. We stand on the brink of disaster—but also at the cusp of wondrous, transformative change.

Praise For A Planet to Win: Why We Need a Green New Deal (Jacobin)…

“A Planet to Win comes at the perfect moment, challenging us to find hope and build a more just world in the face of catas-trophe. The authors outline transformative solutions to the climate crisis that are economically viable and politically possible—if we organize and fight to win.
—Varshini Prakash, Executive Director, Sunrise Movement

“The climate crisis presents an enormous, existential challenge to our species. But we don’t have time to be overwhelmed. The enormity of the task requires even bigger ideas, strategies, and tactics. In this book, some of our sharpest, most lucid voices on cli-mate make a critical intervention in the burgeoning movement to save our planet. Read their book and join the struggle.”
—Keeanga-Yamahtta Taylor, author of From #BlackLivesMatter to Black Liberation

"Urgent, clear-eyed, and energizing, this book is a powerful example of the radical collaborative thinking we desperately need to avoid climate dystopia and win a world where the many can survive and thrive."
—Astra Taylor, Director of What Is Democracy?

“Climate change is now deadly serious; that’s why this deadly serious book is so welcome and so crucial right now. No more nib-bling around the edges—it’s time to actually seize this moment.”
—Bill McKibben, author of Falter, cofounder of 350.org

“An excellent orientation to the ecological crisis we face and the Green New Deal that is the necessary start of our response. This book puts its finger right on the pulse of our moment.”
—Kim Stanley Robinson, author of New York 2140

“A Planet to Win helps us imagine life under the umbrella of a radical Green New Deal.”
—Sierra Magazine

"Offers a dazzling array of constructive projects to accompany the green transition's doling out of economic retribution. A Planet to Win is the American kernel of a vision for a post-carbon future, and its optimism is inspiring."
—Quin Slobidian, Foreign Policy

Kate Aronoff is a Fellow at the Type Media Center and a Contributing Writer at the Intercept. She is the co-editor of We Own the Future and author of The New Denialism. Her writing has appeared in the Guardian, Rolling Stone, Harper’s, In These Times, and Dissent.

Alyssa Battistoni is a Postdoctoral Fellow at Harvard University and an Editor at Jacobin. Her writing has appeared in the Guardian, n+1, the Nation, Jacobin, In These Times, Dissent, and the Chronicle of Higher Education.

Daniel Aldana Cohen is an Assistant Professor of Sociology at the University of Pennsylvania, where he directs the Socio-Spatial Climate Collaborative, or (SC)2. His writing has appeared in the Guardian, Nature, the Nation, Jacobin, Public Books, Dissent, and NACLA.

Thea Riofrancos is an Assistant Professor of Political Science at Providence College and the author of Resource Radicals. Her writing has appeared in the Guardian, n+1, Jacobin, the Los Angeles Review of Books, Dissent, and In These Times. She serves on the steering committee of DSA’s Ecosocialist Working Group.
Loading...
or support indie stores by buying on