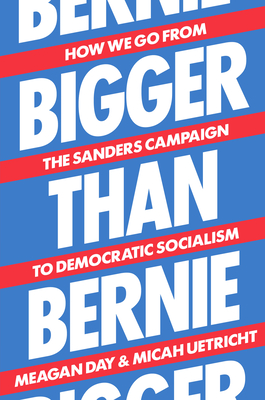 How We Go from the Sanders Campaign to Democratic Socialism

Win or lose, Bernie has reshaped the landscape of American politics. Where does the political revolution go next?

The political ambitions of the movement behind Bernie Sanders have never been limited to winning the White House. Since Bernie first entered the presidential primaries in 2016, his supporters have worked to organize a revolution intended to encourage the active participation of millions of ordinary people in political life. That revolution is already underway, as evidenced by the massive growth of the Democratic Socialists of America, the teachers Bernie motivated to lead strikes across red and blue states, and the rising new generation of radicals in Congress—led by Alexandria Ocasio-Cortez and Ilhan Omar—inspired by his example.

In Bigger than Bernie, activist writers Meagan Day and Micah Uetricht give us an intimate map of this emerging movement to remake American politics top to bottom, profiling the grassroots organizers who are building something bigger, and more ambitious, than the career of any one candidate. As participants themselves, Day and Uetricht provide a serious analysis of the prospects for long-term change, offering a strategy for making “political revolution” more than just a campaign slogan. They provide a road map for how to entrench democratic socialism in the halls of power and in our own lives.

Bigger than Bernie offers unmatched insights into the people behind the most unique campaign in modern American history and a clear-eyed sense of how the movement can sustain itself for the long haul.

Praise For Bigger Than Bernie: How We Go from the Sanders Campaign to Democratic Socialism…

“Meagan Day and Micah Uetricht are two of the most brilliant and courageous intellectuals organically grounded in the marvelous militancy of the Sanders Movement. This indispensable book is a powerful, pioneering analysis of these new radical times, and a compelling vision of where it all might be going.”
—Cornel West, author of Race Matters

“Urgent and essential … no one could better capture the promise and perils of this once-in-a-generation moment. I try never to miss a word that they write, and you shouldn’t either.”
—Krystal Ball, cohost of Rising on HillTV

“Bigger Than Bernie offers an important contribution to the urgent debates about rebuilding the American Left. Leading members of the Democratic Socialists of America, Megan Day and Micah Uetricht link that process to the improbable emergence of Bernie Sanders’ presidential campaign and his insistence on ‘Not me, Us.’ Day and Uetricht put flesh on Sanders’s call for a ‘political revolution’ which they see as not only critical to the success of Sanders’ campaign, but the revitalization of class struggle politics and organizing in the US. Buy, read, discuss and debate this book!”
—Keeanga-Yamahtta Taylor, author of From #BlackLivesMatter to Black Liberation

“Hannah Arendt said we should ‘think what we are doing.’ And that is what Meagan Day and Micah Uetricht have done here. Their book not only examines all that democratic socialists have achieved in the past few years but also gives an exhilarating account of what we’ll be doing in the coming years. Anyone who thinks, with dread or relief, that the work comes to an end after Election Day in 2020 will think again. As Day and Uetricht show, the fight for democratic socialism has only just begun, and I’m going to keep coming back to them and their book in order to understand where and how it goes in the future.”
—Corey Robin, author of The Enigma of Clarence Thomas

“Bigger Than Bernie is a comprehensive and necessary read for those longing for a more humane country, and as someone who has been up close in many of our current fights for justice, I can attest to the power of its analysis. The authors champion non-reformist reforms that arise from and propoel social movements, and provide an essential roadmap for achieving permanent change. An energizing and instructive account that brings socialism into the present tense.”
—RoseAnn DeMoro, former executive of National Nurses United

“Part history lesson, part guide book; this is a love letter to the everyday people and movements who transformed this country and who continue to declare that our lives have meaning, and our future is worth fighting for. Bigger than Bernie, isn’t about the man who’s spent the majority of his political career on the fringes. It’s about fighters. It’s about thinkers. It’s about love. It’s about US.”
—Phillip Agnew, Co-founder of the Dream Defenders

“An indispensable guide to 21st century socialism from the view of clear eyed, sharp witted, smart, funny authors who lay bare the past failures of angry, narrow sectarianism, and offer a bold, dynamic vision for using the Sanders moment to build a stronger left. These authors, like the magazine they write for, give me hope!”
—Jane McAlevey, author of A Collective Bargain

Micah Uetricht is the managing editor of Jacobin magazine. He is the host of the Jacobin Radio podcast The Vast Majority and has written for the Guardian, the Intercept, the Nation, Bookforum, and elsewhere. He is the author of Strike for America: Chicago Teachers Against Austerity (Verso, 2014), a former labor organizer, and a member of the Democratic Socialists of America in Chicago, where he lives.

Meagan Day is a staff writer at Jacobin magazine. Her work has also appeared in The New York Times, The Guardian, Vox, Verso, Mother Jones, The Week, The Baffler, In These Times, and elsewhere.
Loading...
or
Not Currently Available for Direct Purchase