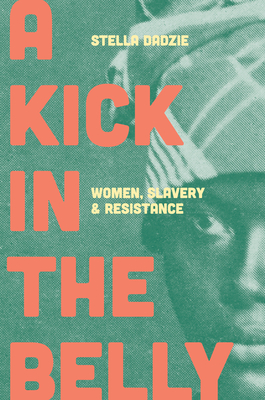 A Kick in the Belly

The forgotten history of women slaves and their struggle for liberation. Enslaved West Indian women had few opportunities to record their stories for posterity. In this riveting work of historical reclamation, Stella Dadzie recovers the lives of women who played a vital role in developing a culture of slave resistance across the Caribbean.

Dadzie follows a savage trail from Elmina Castle in Ghana and the horrors of the Middle Passage, as slaves were transported across the Atlantic, to the sugar plantations of Jamaica and beyond. She reveals women who were central to slave rebellions and liberation. There are African queens, such as Amina, who led a 20,000-strong army. There is Mary Prince, sold at twelve years old, never to see her sisters or mother again. Asante Nanny the Maroon, the legendary obeah sorceress, who guided the rebel forces in the Blue Mountains during the First Maroon War.

Whether responding to the horrendous conditions of plantation life, the sadistic vagaries of their captors or the “peculiar burdens of their sex,” their collective sanity relied on a highly subversive adaptation of the values and cultures they smuggled from their lost homes. By sustaining or adapting remembered cultural practices, they ensured that the lives of chattel slaves retained both meaning and purpose. A Kick in the Belly makes clear that subtle acts of insubordination and conscious acts of rebellion came to undermine the very fabric of West Indian slavery.

Praise For A Kick in the Belly: Women, Slavery and Resistance…

“In clear, accessible prose, this book upturns versions of the past that privilege his-story, revealing a more complex and many-layered past, one in which enslaved women were central to the struggle for freedom.”
—Suzanne Scafe, co-author of The Heart of the Race

“Shocking, enlightening, fascinating, challenging, A Kick in the Belly reframes the overwhelmingly male perspective on the transatlantic slave trade through female experiences and acts of resistance. It is a essential corrective to centuries of sublimation and the presentation of black women who lived through this history as passive victims. I cannot recommend it highly enough. “
—Bernardine Evaristo, author of Girl, Woman, Other

“Stella Dadzie has given us another chapter in women’s history by uncovering resistance that is uniquely rooted in controlling reproduction. This is a meticulously researched narrative that privileges the people who were so brutally treated that it was easy to assume they had no agency. We now know that such an assumption would be mistaken. This is an essential addition to the corpus of historical study into the nature, legacy and impacts of the period of African enslavement. It’s finally a work that allows us to better understand and recognise how women disrupted the principal economic principles supporting the enslavement of generations of people.”
—Arike Oke, Director of the Black Cultural Archives

“What has become distinctive of Dadzie’s scholarship is the way she centres black women in their own stories and this continues in A Kick in the Belly … After being fed narratives that ‘the material doesn’t exist,’ A Kick in the Belly shows that it is really a matter of knowing where to look and how to listen.”
—Sarah Lusack, Black Ballad

“Amplifies and honours the innovative ways women fought for freedom and kept their cultures alive despite the brutality they faced … When filmmaker Ava DuVernay says she is her ancestor’s wildest dreams, these are the women she’s talking about.”
—Sharmaine Lovegrove, Red

“Highlighting the experiences of enslaved women in the Anglo-Caribbean, Dadzie gives primacy, as she did in her seminal book Heart of the Race (with Beverley Bryan and Suzanne Scafe), to Black women’s voices. In doing so, she puts a narrative of empowerment and hope at the centre of the brutal history of slavery.”
—Meleisa Ono-George, Times Literary Supplement

“Transatlantic slavery is one of the most misunderstood and misrepresented periods of history. Stella Dadzie offers a much-needed corrective by centring on the experiences of black women forced into the plantation system.”
—Kehinde Andrews, BBC History Magazine (“Books of the Year 2020”)

“Over 200 or so pages of impassioned prose, [Dadzie] delves into the many stories of female freedom fighters, from Jamaica’s Queen Nanny of the Maroons, who used guerrilla warfare against the British, to those who murdered their masters with poisoned draughts like Baby of St Kitts, or became runaways like Betty, Charlotte and Molly who took flight as a trio from their Barbados plantation.”
—Angela Cobbinah, Camden New Journal

Stella Dadzie is best known for her co-authorship of The Heart of the Race: Black Women’s Lives in Britain, which won the 1985 Martin Luther King Award for Literature, and was recently re-published by Verso in the Feminist Classics series. She is a founding member of OWAAD (Organisation of Women of African and Asian Descent), a national umbrella group that emerged in the late 1970s as part of the British civil rights movement, and was recently described as one of the "grandmothers" of Black Feminism in the UK. Her career as a teacher, writer, artist and education activist spans over 40 years.
Loading...
or
Not Currently Available for Direct Purchase