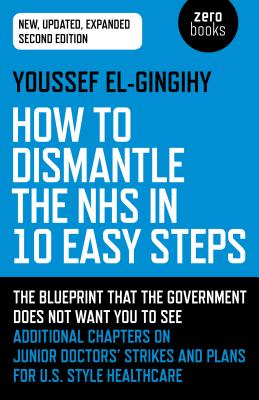 How to Dismantle the Nhs in 10 Easy Steps

The Blueprint That the Government Does Not Want You to See

Events have spiralled since the first edition of How to Dismantle the NHS in 10 Easy Steps. The junior doctors' strike, the Conservative victory in the 2015 general election, the Corbyn phenomenon, the unexpected Brexit vote and the arguably even more unexpected loss of the Conservative majority in 2017. Further, since writing the first edition, Dr. Youssef El-Gingihy found himself stricken with a life-threatening illness and the NHS doctor became the NHS patient. The fight to save the NHS transformed into a fight for his own life. Now, fully recovered, Dr. Youssef El-Gingihy returns to his 10 Easy Steps in order to strengthen his original argument and continue what Labour leader, Jeremy Corbyn, deems 'one of the most fundamental battles we face in a struggle for a British society that works for the many'. In the year of the 70th anniversary of the NHS, Dr El-Gingihy's insights have never been more vital as our national health service continues to be hit by the privatisation of public services. New expanded second edition with chapters on junior doctor's strikes and plans for US-style healthcare.

Youssef El-Gingihy is a GP working in London's Tower Hamlets. He studied medicine, neuroscience and English literature at Oxford University and completed his clinical studies at Guy's, King's & St Thomas' in London. In 2016 he was one of just ten people selected for the Labour Party's NHS think tank. El-Gingihy has been working within the national health service since 2006, and his articles about the health crisis and the privatisation of the NHS have been published widely across British media, including essays in The Independent and The Guardian. The first edition of his book How to Dismantle the NHS in 10 Easy Steps was published by Zero Books in 2015.
Loading...
or
Not Currently Available for Direct Purchase