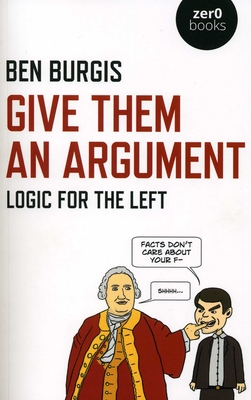 Give Them an Argument

Logic for the Left

'Ben Burgis understands that in order to persuade people to join a political movement, you have to master the techniques of rigorous argumentation. He masterfully exposes the cheap sophistry of right-wing 'philosophy' and shows why there's still a place for logic and reason in political discourse. This is a crucial handbook for those who want to 'crush' and 'destroy' the Ben Shapiros of the world.' Nathan Robinson, Editor, Current AffairsMany serious leftists have learned to distrust talk of logic and logical fallacies, associated with right-wing logicbros. This is a serious mistake. Unlike the neoliberal technocrats, who can point to social problems and tell people trust us, the serious Left must learn how to argue and persuade. In Give Them an Argument, Ben Burgis arms his reader with the essential knowledge of formal logic and informal fallacies.

Ben Burgis has a Ph.D. in Philosophy from the University of Miami. He is a science fiction writer whose work has appeared in publications such as Tor.com and in Prime Books. Burgis now teaches at Rutgers University, New Jersey.
Loading...
or support indie stores by buying on