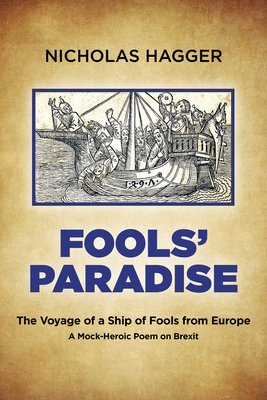 The Voyage of a Ship of Fools from Europe, a Mock-Heroic Poem on Brexit

In Fools' Paradise, a mock-heroic poem on Brexit which complements his masque King Charles the Wise, Nicholas Hagger presents the most important British event since the Second World War: the Brexiteers' struggle to wrest control of the UK's laws, borders, money and trade from the EU and turn the UK into a more prosperous paradise. In 16 cantos and an epilogue of heroic couplets with an epic tone, he narrates the 2018 Chequers compromise and its aftermath: the EU's opposition, lack of internal support, looming 'no deal' and requests for extensions that keep the UK in the EU. He shows the UK Ship of State as manned by a squabbling crew sailing for an illusory paradise and too riven by division to reach agreement. The dream all were promised seems undeliverable. In the tradition of the social satire of Dryden and Pope, the elevated style is undermined by a recurring image of the Ship of Fools in Sebastian Brant's 1494 Swiss poem Ship of Fools (Das Narrenschiff), which makes a chaotic voyage from Europe to an illusory paradise across the waves. It becomes apparent that all on the UK Ship of State are to some extent living in a fools' paradise. Focusing on the historic decision to leave Europe that if carried through would have immense repercussions for coming generations, Nicholas Hagger presents the warring factions on the UK Ship of State and in true Universalist manner foresees a resolution of the conflict in the reconciliation of a coming united world. This is an astonishing poem that approaches the most important national event of our time in the spirit of Tennyson and gets to the heart of the UK's national predicament.

Nicholas Hagger is the author of more than 50 books that include a substantial literary output and innovatory works within history, philosophy, literature and international politics and statecraft. As a man of letters he has written over 2,000 poems, two poetic epics, five verse plays, 1,200 short stories, two travelogues and three masques. His archive of papers and manuscripts is held as a Special Collection in the Albert Sloman Library at the University of Essex. In 2016 he was awarded the Gusi Peace Prize for Literature, and in 2019 the BRICS silver medal for 'Vision for Future'. He lives in Essex, UK.
Loading...
or
Not Currently Available for Direct Purchase