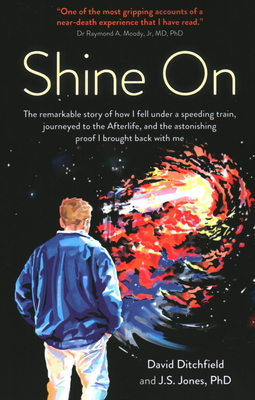 The Remarkable Story of How I Fell Under a Speeding Train, Journeyed to the Afterlife, and the Astonishing Proof I Bro

Across thousands of years, people have described one of the most astonishing of all human phenomena: the near-death experience (NDE), the subjective experience of an Afterlife, a place where we apparently survive death. The more powerful the NDE, the more profound the after effects. The ambitious reset their priorities. Atheists change their values. Doctors rethink their beliefs. But what if the after effects of an NDE were undeniable? What if someone suddenly developed the ability to produce high quality paintings of their NDE, a new-found skill that went far beyond the artistic ability they had before? And what if that same person then suddenly acquired the ability to compose classical symphonies after their NDE? And their symphonies were then premiered at sell out orchestral concerts, even though, to this day, they are unable to read or write a single note of musical notation. Wouldn't this be proof that even a cynic would have a hard time explaining? After his NDE, this is exactly what happened to David. And this is his story.

In 2006 David Ditchfield was dragged under a speeding train in a freak accident. As the surgeons fought to save him, he had a profound near-death experience (NDE). When he woke up in hospital, he had acquired astonishing new abilities. He found he could paint dramatic paintings of what he had seen in the Afterlife, far beyond any artistic ability he had before. He then discovered he could compose classical music, having never received any training. To this day, he cannot read or write a single note of musical notation, and yet his debut NDE-inspired symphony, The Divine Light, was premiered at a sell-out orchestral concert to a standing ovation. He lives, paints and composes in a converted riverside mill near Cambridge, UK. J S Jones gained her PhD from the University of Stirling and has since authored a number of scientific journal articles. She has been friends with David Ditchfield for many years and witnessed the events in his remarkable story first-hand. Impressed by what she saw, she undertook creative writing courses so that she could co-author Shine On and do his story justice, because she believes it is a remarkable story that deserves to be told. She is now working on a debut fiction novel. She lives in Fife, Scotland.
Loading...
or
Not Currently Available for Direct Purchase