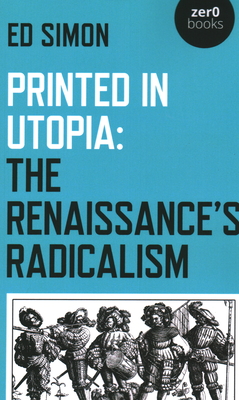 Printed in Utopia examines the bloody era of the Renaissance in all of its contradictions and moments of utopian possibility. From the dissenting religious anarchists of the 17th century, to the feminist verse of Amelia Lanyer and Richard Barnfield's poetics of gay rights. From an analysis of the rhetoric of feces in Martin Luther, to the spiritual liberation of Anna Trapnell. What is presented is the radical Renaissance too often hidden away, an age which birthed our modern world in all of its ugliness, but which still holds the latent seeds for a new and better future world.

Ed Simon is an Editor-at-Large with the Marginalia Review of Books, a Channel of the Los Angeles Review of Books, an editor at Berfrois, and a staff writer at the Millions. He is a regular contributor on the subjects of literature, religion, culture, and politics at many publications including The Atlantic, The Paris Review and Jacobin. He lives in Arlington, Massachusetts.
Loading...
or
Not Currently Available for Direct Purchase