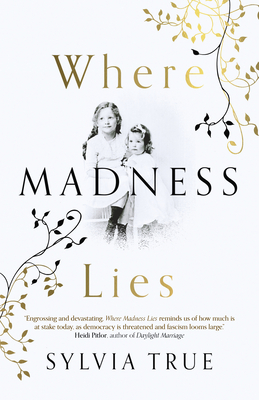 'A masterful novel. Where Madness Lies unfolds against the backdrop of the Holocaust and seamlessly reflects back to us our own perilous times. Told with utter insight and beauty.' Annie Weatherwax, author of All We Had, now a major motion picture. Germany, 1934. Rigmor, a young Jewish woman is a patient at Sonnenstein, a premier psychiatric institution known for their curative treatments. But with the tide of eugenics and the Nazis' rise to power, Rigmor is swept up in a campaign to rid Germany of the mentally ill. USA, 1984. Sabine, battling crippling panic and depression commits herself to McLean Hospital, but in doing so she has unwittingly agreed to give up her baby. Linking these two generations of women is Inga, who did everything in her power to help her sister, Rigmor. Now with her granddaughter, Sabine, Inga is given a second chance to free someone she loves from oppressive forces, both within and without. This is a story about hope and redemption, about what we pass on, both genetically and culturally. It is about the high price of repression, and how one woman, who lost nearly everything, must be willing to reveal the failures of the past in order to save future generations. With chilling echoes of our time, Where Madness Lies is based on a true story of the author's own family.

Sylvia True, author of the popular novel The Wednesday Group, was born in Manchester, England to parents who were refugees from Germany. She moved to the US at the age of five, and now lives in Massachusetts with her husband and dogs where she teaches high school chemistry.
Loading...
or support indie stores by buying on