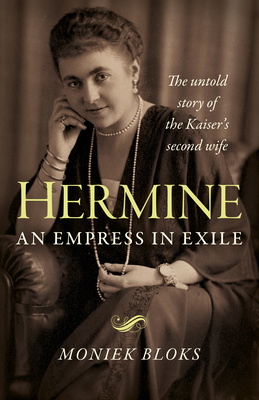 An Empress in Exile: The Untold Story of the Kaiser's Second Wife

Hermine Reuss of Greiz is perhaps better known as the second wife of the Kaiser (Emperor Wilhelm II of Germany) whom she married shortly after the death of his first wife Auguste Viktoria and while he was in exile in the Netherlands. She was by then a widow herself with young children. She was known to be ambitious about wanting to return to power, and her husband insisted on her being called 'Empress'. To achieve her goal, she turned to the most powerful man in Germany at the time, Adolf Hitler. Unfortunately, her dream was not realised as Hitler refused to restore the monarchy and with the death of Wilhelm in 1941, Hermine was forced to return to her first husband's lands. She was arrested shortly after the end of the Second World War and would die under mysterious circumstances while under house arrest by the Red Army.

Moniek Bloks is the editor of the successful blog History of Royal Women. She lives in the Netherlands and has a background in law. Her interest in historical royal women and writing began at an early age, and she has been glad to share the stories of often little-known royal women. When she isn't writing, she is visiting castles and palaces around Europe with her trusty camera.
Loading...
or support indie stores by buying on