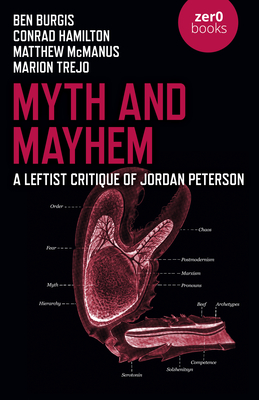 A Leftist Critique of Jordan Peterson

Jordan Peterson rocketed to fame in the 2010s and has preached on everything from the evils of postmodern neo-Marxism to the mating habits of lobsters ever since then. The Left has since leveled many criticisms about the Canadian psychologist, characterizing him as everything from an apologist for the alt-right to simply not being interesting or profound. Myth and Mayhem: A Leftist Critique of Jordan Peterson is intended as a comprehensive critical look at all aspects of his thought, from the philosophical depths to the mundane heights. Written by four authors who each look at a different element of his thought, it shows why taking Peterson seriously doesn't mean embracing him. Includes an introduction by Slavoj Zizek.

Ben Burgis has a Ph.D. in Philosophy from the University of Miami. He is a science fiction writer whose work has appeared in publications such as Tor.com and in Prime Books. Burgis now teaches at Rutgers University, New Jersey. Conrad Hamilton is a doctoral student at Paris 8 University, currently developing a thesis on the relationship between social agency and the value form in the works of Marx under the supervision of Catherine Malabou. He is also a contributor to Zero Books' What Is Post-Modern Conservatism: Essays On Our Hugely Tremendous Times, publishing in 2020. He lives in Paris, France. McManus worked for the Committee for International Justice and Accountability. He completed his PhD in 2017. He is the editor of What Is Post-Modern Conservatism: Essays On Our Hugely Tremendous Times. He lives in Monterrey, Mexico. Marion Trejo is Professor of Politics and International Relations at Tec de Monterrey, Mexico. She completed her Bachelors in International Relations at Tec de Monterrey and her Masters in Philosophy at the National Autonomous University of Mexico. She is co-author of Myth and Mayhem: A Leftist Critique of Jordan Peterson, to be released by Zero Books in 2020. She lives in Monterrey, Mexico.
Loading...
or
Not Currently Available for Direct Purchase