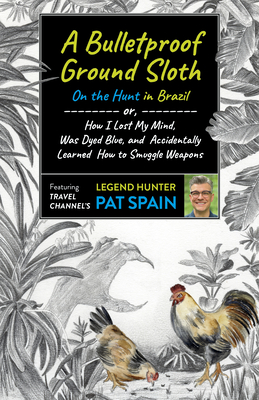 On the Hunt in Brazil: Or, How I Lost My Mind, Was Dyed Blue, and Accidentally Learned How to Smuggle Weapons

"This is the scene everyone will remember," is how the director described the bullet-ant ceremony moments before Pat Spain took his place in the line of initiates. If online views, memes, family parties, and talk-show mentions are the measure, he wasn't wrong. The Tucandeira ceremony of the Sater -Maw is known as the most extreme ritual in the world, and Pat agrees with that assessment wholeheartedly. After hosting hundreds of hours of wildlife-adventure TV programs, Pat is no stranger to the pain animals can inflict, but the bullet ants took this to an entirely new level. On the Hunt in Brazil is an unblinking look into Pat's journey through Amazonia with a National Geographic film crew, attempting to uncover the truth behind the mythical mapinguari - a giant one eyed monster who can kill you with a scream. Over the course of two weeks, Pat participates in the Tucandeira, smuggles weapons on an aircraft, accidentally exposes himself to old people, learns that Brazil's sexy reputation is well deserved, and hears an ancient legend, never before shared with a Westerner, that points him towards a conclusion about the mapinguari and a surprising explanation for the seemingly tall-tales.