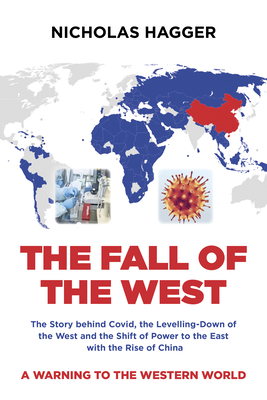 The Fall of the West

The Story Behind Covid, the Levelling-Down of the West and the Shift of Power to the East with the Rise of China

In The Syndicate (2004) Nicholas Hagger described how in the 20th century a Syndicate of litist mega-rich families levelled down the leading Western countries by promoting revolutions, wars and independence movements against their empires, and planned a New World Order and world government that would control the earth's resources for their own benefit. In The Secret History of the West (2005) he traced the Syndicate's roots back to secret Freemasonic organisations and revolutions that undermined the West from the Renaissance to the early 20th century. In The Fall of the West (2022), the third book in his trilogy on the West, Hagger updates the story to include the pandemic and describes how Syndicate-driven 21st-century events from the War on Terror to Covid have brought the Western financial system to the brink of collapse and shifted power from the West to the East, and China. In this first impartial attempt to assemble all the evidence to date for the origin of Covid (like fitting together available pieces of a jigsaw to reveal the main picture) Hagger, the first to discover the Cultural Revolution in China in March 1966, finds that the three main features of Covid-19 were man-made by American NIAID-funded medics in 2002 and patented 73 times since 2008, and seem to have been surreptitiously used as a bio-weapon in a Syndicate plan to limit the rise of China and its expanding trade. A dangerous new Biological Age has been born, and the West faces being levelled down and a sudden fall. Hagger sees the post-Covid West's dream of creating a good New World Order - a vaccine-protected democratic, presidential, part-federal world government and World State with sufficient authority to abolish war and solve the world's post-Covid problems - as being challenged by the self-interested Syndicate's levelling-down; and to survive, it first has to go along with the Syndicate's plan for West and East to draw together into an authoritarian world government involving China, and democratise later. This is a thought-provoking work with a prophetic vision of the future.

Nicholas Hagger is the author of more than 50 books that include a substantial literary output and innovatory works within history, philosophy, literature and international politics and statecraft. As a man of letters he has written over 2,000 poems, two poetic epics, five verse plays, 1,200 short stories, two travelogues and three masques. In 2016 he was awarded the Gusi Peace Prize for Literature, and in 2019 the BRICS silver medal for 'Vision for Future'. He lives in Essex, UK.
Loading...
or
Not Currently Available for Direct Purchase