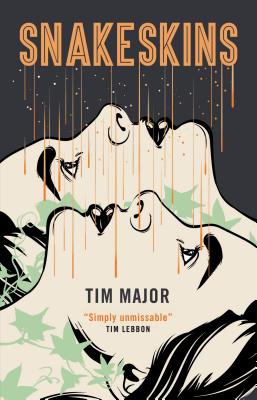 A timely science-fiction thriller examining the repercussions of rejuvenation and cloning on individuals' sense of identity and on wider society.

Caitlin Hext's first shedding ceremony is imminent, but she's far from prepared to produce a Snakeskin clone. When her Skin fails to turn to dust as expected, she must decide whether she wishes the newcomer alive or dead.

Worse still, it transpires that the Hext family may be of central importance to the survival of Charmers, a group of people with the inexplicable power to produce duplicates every seven years and, in the process, rejuvenate. In parallel with reporter Gerry Chafik and government aide Russell Handler, Caitlin must prevent the Great British Prosperity Party from establishing a corrupt new world order.

Snakeskins is an SF thriller examining the repercussions of rejuvenation and cloning on individuals' sense of identity and on wider society, with the tone of classic John Wyndham stories and the multi-strand storytelling style of modern TV series such as Channel 4's Humans.

Tim Major is the author of You Don't Belong Here, Blighters and Carus & Mitch, the YA novel Machineries of Mercy, the short story collection And the House Lights Dim, and a non-fiction book about the silent crime film, Les Vampires. Tim's short stories have appeared in Interzone, Not One of Us and numerous anthologies, including Best of British SF 2017 and Best Horror of the Year 10, edited by Ellen Datlow. He is also co-editor of the British Fantasy Society's fiction journal, BFS Horizons. Find out more at www.cosycatastrophes.wordpress.com

"A premise worthy of Wyndham becomes a twisty political SF thriller in the hands of Major. Snakeskins is full of action and surprise, keeping me reading, but the real hook lies in the rich seam of humanity within." – Aliya Whiteley, author of The Beauty

"Another great page-turner from Tim Major! We follow Caitlin, a teenage girl, whose ability to produce ‘snakeskin’ clones causes emotional ripples that spread more widely than she’d ever anticipated. It’s a gripping and thought-provoking tale, with Major exploring the wider implications of cloning and extended life-spans in the growth of a corrupt new government which has consequences for all." – Alison Littlewood, author of The Hidden People

"John Wyndham meets Black Mirror in Tim Major's scintillating novel, a parallel world thriller, which takes as its themes duplicity, paranoia and what it truly means to be human. Snakeskins wrapped its coils around me and wouldn't let go." – Mark Morris, author of Toady and Stitch

"Tim Major has a talent for combining big ideas to create something exciting. With Snakeskins he gives us a SF thriller brimming with questions about identity." – Priya Sharma, author of Ormeshadow

"A cautionary tale for our times." – James Brogden, author of The Plague Stones and Bone Harvest

"Whether as page-turning thriller, coming of age story, or timely satire on a broken Britain, Snakeskins is a delight." – Robert Shearman

“Tim Major masterfully weaves his plot strands together, studding Snakeskins with images of duality and metamorphosis to create a dark and compelling vision of corruption and conspiracy with a subtly satirical edge.” – The Financial Times

"This taut and fast-paced SF thriller ably plays around with its central device, exploring the ramifications being duplicated has on society and the self." – Booklist

"An unusual setup for an intricate political thriller that coils in on itself, tightening the tension as it circles toward satisfyingly shocking answers." – Barnes & Noble SFF Blog

“Clever, intriguing and suspenseful … a must-read book from a terrific new voice” – Alison Littlewood on You Don’t Belong Here

“A beautifully-written, cleverly unsettling puzzle-box of a novel” – Adam Roberts on You Don’t Belong Here

“You Don’t Belong Here is that perfect blend of cautionary tale, psychological horror and introspective character study.” – The Eloquent Page

“It has freshness and it’s fluently written entertainment.” – Rising Shadow

“Strongly recommended for fans of original and uniquely weird fiction.” – Ginger Nuts of Horror on Blighters

“Once I started reading it, I couldn’t put it down until I reached the end” – Lynda Rucker on Carus and Mitch
or support indie stores by buying on
Copyright © 2020 American Booksellers Association