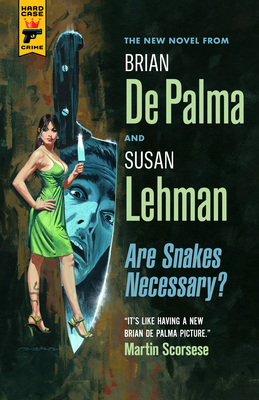 When the beautiful young videographer offered to join his campaign, Senator Lee Rogers should’ve known better. But saying no would have taken a stronger man than Rogers, with his ailing wife and his robust libido. Enter Barton Brock, the senator’s fixer. He’s already gotten rid of one troublesome young woman -- how hard could this new one turn out to be?

Pursued from Washington D.C. to the streets of Paris, 18-year-old Fanny Cours knows her reputation and budding career are on the line. But what she doesn’t realize is that her life might be as well…

Praise For Are Snakes Necessary?…

"Deliciously deceptive....right at home in a De Palma movie (something in the mode of Dressed to Kill or Body Double)...a wonderful, immensely satisfying thriller." -- Booklist Starred Review

"A pastiche of hard-boiled crime fiction that doesn’t scrimp on the lurid pleasures of the genre."  - The Washington Post

"This is De Palma echoing Hitchcock yet again, just as he’s done so many times on screen." - Mystery Tribune

"A doozy...With this inventive, fast-paced page turner in your hands you will also be meeting your next fun and exciting read." - Cinema Retro

"A good read for an airplane ride or your first day on the beach." - Bookgasm


"Fans will no doubt relish all the things in it that they have come to know and love from his films [...including] a wild finale that practically unfolds in slow-motion on the page, in the best possible way. - Roger Ebert.com
“moves like a shot” - RogerEbert.com

“Combines conspiracy and political intrigue with Hollywood hubris... acolytes of De Palma’s work would be remiss not to add a copy of Are Snakes Necessary? to their pulp fiction libraries” - Adventures in Poor Taste

“Brilliant plotting, breathless pacing... this is a must-read for noir fans” - The Crime Review

"Many of us are looking for a fast-paced, escapist page-turner that will help us tear our eyes away from the spiraling numbers on that Johns Hopkins map. Early reviews suggest that Are Snakes Necessary?, the first novel by Brian De Palma and his partner, Susan Lehman, is just the ticket. So far, critics agree that the blurb on the cover from Martin Scorsese is no lie: “It’s like having a new Brian De Palma picture.”  - The Criterion

"ARE SNAKES NECESSARY? is controlled chaos. It’s fun, startling, funny in spots and not so funny in others.... This is a quick, smart read that will leave you wanting more from this collaborative writing team."   -Book Reporter

BRIAN DE PALMA is the world-famous director of more than thirty films, including Carrie, Scarface, The Untouchables, Dressed to Kill, Body Double, Blow Out, and the original Mission: Impossible. The subject of the 2015 documentary De Palma, he is considered one of the most accomplished filmmakers of the last fifty years, a peer to directors such as Steven Spielberg, Francis Ford Coppola, and Martin Scorsese and an inspiration to next-generation directors such as Quentin Tarantino.

SUSAN LEHMAN is a former editor of the New York Times and author whose writing has appeared in the Washington Post, The Atlantic Monthly, Vogue, The New Yorker, and Spy magazine. An attorney by training, she also served as communications director at the Brennan Center for Justice.
Loading...
or support indie stores by buying on