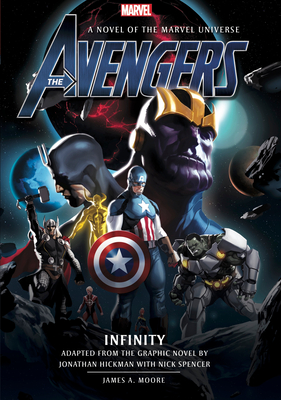 The Avengers journey into deep space, where they unite the intergalactic races against the Builders--deadly aliens who seek to destroy the known galaxy. While the heroes are gone, Thanos sets his sights on Earth, sending the Black Order to launch the assault. It falls to the Inhumans, Black Panther, Doctor Strange, the X-Men, and more to defend the planet.

It falls to the other heroes of Earth--the Inhumans, the Black Panther, Namor the Sub-Mariner, Doctor Strange, the X-Men, and more--to defend Attilan, Wakanda, Atlantis, and the rest of the planet. To defeat Thanos, the defending forces will need to employ a new weapon--one that may be as deadly as the invading force.

JAMES A. MOORE is the author of over forty novels, including the critically acclaimed Fireworks, Under The Overtree, Blood Red, Blood Harvest, the Serenity Falls trilogy (featuring his recurring anti-hero, Jonathan Crowley) Cherry Hill, Alien: Sea of Sorrows and the Seven Forges series of novels. He has twice been nominated for the Bram Stoker Award and spent three years as an officer in the Horror Writers Association, first as Secretary and later as Vice President.
Loading...
or
Not Currently Available for Direct Purchase