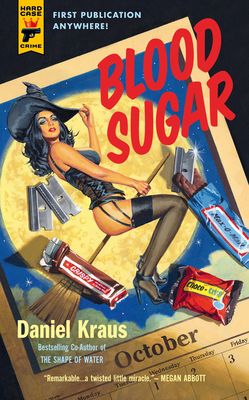 In a ruined house at the end of Yellow Street, an angry outcast hatches a scheme to take revenge for all the wrongs he has suffered. With the help of three alienated kids, he plans to hide razor blades, poison, and broken glass in Halloween candy, maiming or killing dozens of innocent children. But as the clock ticks closer to sundown, will one of his helpers—an innocent himself, in his own streetwise way—carry out or defeat the plan?

Told from the child’s point of view, in a voice as unforgettable as A Clockwork Orange, Kraus’ novel is at once frightening and emotional, thought-provoking and laugh-out-loud funny. It’ll make you rethink your concepts of family, loyalty, and justice—and will leave you double-checking the wrappers on your Halloween candy for the rest of your days.


“A Stephen King tale told by a pidgin Artful Dodger, it’s a twisted little miracle with a sneaking, beating heart.” —Megan Abbott, New York Times–bestselling author of Give Me Your Hand

“Mark this one: most likely to give you nightmares.”
—Den of Geek

“An eye-opening look at what some have to do to survive.”
—Library Journal

“Blood Sugar is itself both a trick and a treat. Kraus’s trick is in hiding a deeply emotional novel in the festive trappings of a Halloween story; the treat, of course, is the reward of reading something so gripping and, ultimately, rewarding.”
—Cemetery Dance

“Evoking both Jim Carroll’s The Basketball Diaries and Faulkner’s The Sound and the Fury, it’s intimate and utterly engaging, a suspenseful glimpse into the desperate lives of its disadvantaged protagonists.”
—Mystery Scene

“A well-crafted debut novel that impressed me with its powerful story.”
—Risingshadow

DANIEL KRAUS is a New York Times bestselling author. With Guillermo del Toro, he co-authored The Shape of Water, based on the same idea the two created for the Oscar-winning film. Also with del Toro, Kraus co-authored Trollhunters , which was adapted into the Emmy-winning Netflix series. Kraus's The Death and Life of Zebulon Finch was named one of Entertainment Weekly's Top 10 Books of the Year, and he has won two Odyssey Awards (for both Rotters and Scowler) and has been a Library Guild selection, YALSA Best Fiction for Young Adults, Bram Stoker finalist, and more. Kraus's next novel is The Living Dead, a posthumous collaboration with legendary filmmaker George A. Romero. Kraus's work has been translated into over 25 languages. His feature films as director include Musician (New York Times Critics' Pick) and Sheriff (PBS's Independent Lens). He lives in Chicago. Visit him at danielkraus.com.
Loading...
or support indie stores by buying on