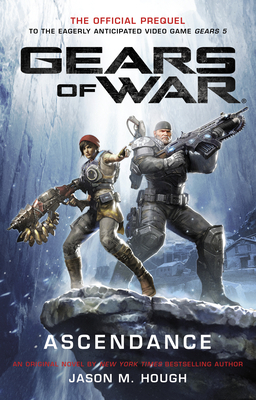 The official prequel to the action video game Gears 5, beginning immediately after Gears of War 4 and leading directly into the new game.

THE OFFICIAL BRIDGE TO GEARS 5

Following Reyna Diaz's death at the hands of the Swarm, Kait seals her mother's tomb, swearing revenge. With her allies, including JD Fenix and Del Walker, she returns to New Ephyra to warn the Coalition of Ordered Governments:

THE SWARM IS COMING

However, First Minister Jinn requires proof of the threat. She also demands their utter loyalty, driving a wedge between the allies. Joined by Marcus Fenix, Kait strikes out on her own while JD and Del embark on a sanctioned mission to prove that the threat is real. With the fate of humankind hanging in the balance, it's a race against time.

Praise For Gears of War: Ascendance…

“an interesting story that manages to both entertain and pique one’s interest in the next campaign”. 8/10 - XBox Addict

“if you are a Gears fan, there is no question of whether or not you should read Gears of War: Ascendance. The answer is yes, and you should do it before playing Gears 5 if you want the full experience...not only does this novel bridge the time between the fourth and the fifth game, it’s also a hell of a fun read” 4* - The BiblioSanctum

Jason M. Hough is the New York Times bestselling author of the Darwin Elevator series and Zero World, published in the UK by Titan Books. He has been a 3D artist, animator, and game designer for Metal Fatigue, Aliens vs. Predator, and others.
Loading...
or
Not Currently Available for Direct Purchase