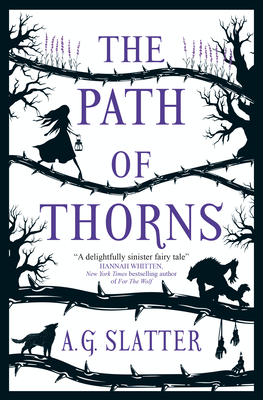 The Path of Thorns

A lush and twisted dark fairy tale suffused with witchcraft, dark secrets and bitter revenge from the award-winning author. Exquisite, haunting and at times brutal, readers of Naomi Novik and Erin Morgenstern will be entranced.

Asher Todd comes to live with the mysterious Morwood family as a governess to their children. Asher knows little about being a governess but she is skilled in botany and herbcraft, and perhaps more than that. And she has secrets of her own, dark and terrible – and Morwood is a house that eats secrets. With a monstrous revenge in mind, Asher plans to make it choke. However, she becomes fond of her charges, of the people of the Tarn, and she begins to wonder if she will be able to execute her plan – and who will suffer most if she does. But as the ghosts of her past become harder to control, Asher realises she has no choice.

Praise For The Path of Thorns…

PRAISE FOR ALL THE MURMURING BONES

"A rich and satisfying novel about a young woman, born to be the last hope of a once powerful family, who resists an arranged marriage and won’t stop at murder or magic to survive in a world of abusive men and dangerous, supernatural creatures. Shifting between scenes of wonder and horror, a complex plot is gradually revealed, as well paced and gripping as a thriller." - The Guardian

"This is a magnificently written, smashingly good read...Slatter’s prose is as lustrous as jet beads against black silk. Readers will savor every word." - Locus Magazine

"Twists and turns and weaves Grimm-like fairytales into a dark tale that gets darker the further you read. 5*" - She Reeds By The Sea

"A. G. Slatter is a born storyteller. Her work is as beautiful and dangerous as the best fairy tales and All the Murmuring Bones is entirely enchanting. A magical read" - Alison Littlewood, author of A Cold Season

"A beautiful gothic monstrosity (monstrosity being a good thing), one of those rare books you don’t just want to read but want to live inside of." - Mike Mignola, creator of Hellboy

"Like J.R.R. Tolkien, Slatter’s taken her personal invented mythos and crafted a world around it that is at once familiar and deeply strange. Lush and chilling, eerie and exquisite, brutal and elegant… I defy anyone to stop turning pages until they’ve come to the end." - Ellen Kushner, author of The Privilege of the Sword

"Harrowing and beautiful, this is the grim, fairy-tale gothic you’ve been waiting for. All the Murmuring Bones is Slatter at her darkest—and finest. Don’t miss it!" - Christopher Golden, New York Times bestselling author of Ararat and Red Hands

"All the Murmuring Bones is fairy-tale gothic at its finest and then some. Luscious, richly infused with Slatter’s gift for creating place; this is a world that invites travel along all of its dark roads and secret paths. Long after you’re done with the book, you’ll sit there drenched still in its magic, wondering how you might find your way back." - Cassandra Khaw, author of Hammers on Bone

"A story as gorgeously gothic as its title. This is a novel of blood and bones, of salt and silver, of an absolutely haunting richness. I was compelled from the very beginning and held rapt to the end." - Kat Howard, author of An Unkindness of Magicians

"Like the sea at its heart, Slatter’s haunting story is treacherous and lovely in all its dark depths." - Heather Kassner, author of The Bone Garden

"Two uncanny houses, Hob’s Hallow and Blackwater, bookend Angela Slatter’s new novel like grim sentinels. Whether they are cursed or enchanted, majestic or moldering, refuge or prison, only reading to the end will tell. Meanwhile, the landscape stretching between these gothic structures abounds with corpsewights, kelpies, ghosts, rusalki, werewolves, clockwork mechanicals, and—most alarmingly—actors. And across this treacherous terrain walks Miren O’Malley, scarred, furious, and growing in power. All the Murmuring Bones is brutal and beautiful throughout, with moments of tenderness hard-won and harder-kept, and, pervading all, an atmosphere of inescapable threat like the taste of salt wind and the sound of silver bells ringing in the deep." - C. S. E. Cooney, World Fantasy Award-winning author of Bone Swans: Stories

"The [gothic] fantasy worlds of Angela Slatter are among the fullest, most vividly realised of our time. The primal ore of folk and fairytale runs glittering through the dark layers of their history and geology, and Slatter mines them for all they're worth. She brings them to the light cut and polished in ways that will make you gasp. In the furnace of her imagination what she produces is tantamount to a sword from out the stone. Her prose is molten metal. Hail the Once and Future Queen!" - Neil Snowdon

Angela Slatter has won a World Fantasy Award, a British Fantasy Award, a Ditmar, an Australian Shadows Award and six Aurealis Awards for her short stories. She has an MA and a PhD in Creative Writing, is a graduate of Clarion South 2009 and the Tin House Summer Writers Workshop 2006. Angela’s short stories have appeared in many Best Of anthologies, and her work has been translated into many languages. She teaches creative writing and lives in Brisbane, Australia.