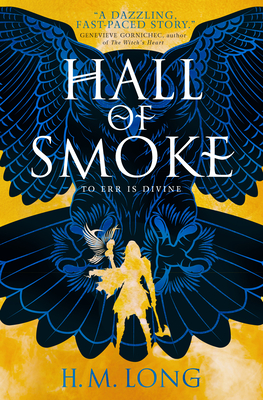 Epic fantasy featuring warrior priestesses and fickle gods at war, for readers of Brian Staveley's Chronicles of the Unhewn Throne. Hessa is an Eangi: a warrior priestess of the Goddess of War, with the power to turn an enemy's bones to dust with a scream. Banished for disobeying her goddess's command to murder a traveller, she prays for forgiveness alone on a mountainside.

Beset by zealot soldiers, deceitful gods, and newly-awakened demons at every turn, Hessa burns her path towards redemption and revenge. But her journey reveals a harrowing truth: the gods are dying and the High Halls of the afterlife are fading. Soon Hessa's trust in her goddess weakens with every unheeded prayer.
Thrust into a battle between the gods of the Old World and the New, Hessa realizes there is far more on the line than securing a life beyond her own death. Bigger, older powers slumber beneath the surface of her world. And they're about to wake up.

This book was brilliantly written. I was hooked from the very first page - Lisa's Books, Gems & Tarot

A wonderfully written and immersive story which for me breathed new life into adult epic fantasy books. – Paperbacks & Pinot

An impressive feat of world building and so wonderfully described, Hall of Smoke is a remarkable feat of fantasy for any discerning reader – Bookshelf Butterfly

An absolutely remarkable, compelling and expansive fantasy experience that took hold of me completely... if you have any interest in fantasy, no matter how minute, then Hall Of Smoke is a must read. – Always Trust in Books

Hall of Smoke is a triumph of a debut. It’s a gripping fantasy that will reel you in from the first page and never let you go... This story takes you for a ride through varied lands, with an incredible cast of characters. It is dazzling and compelling, you will not be able to put this down. – Words of a Paige

It has been a long time since I read a book that completely sucked me in. Hall of Smoke just did that. With its intriguing plot, on-point world building, well-detailed magic system, and interesting characters, I had this constant feeling to know about it more. – Levicorpvs

Hall of Smoke is a beautifully written novel with an exquisitely detailed world. – Twisted in Pages

I would recommend this book to those who love reading fantasy stories, especially Epic/High fantasy novels – Paperback Tomes

A refreshing take on the holy quest trope – The Frumious Consortium

A deep dive into the the woods, mist, and magical mysteries of those of antique sagas just sitting and waiting be opened – The Alliterates

H. M. Long is a Canadian fantasy writer, author of HALL OF SMOKE and TEMPLE OF NO GOD, who loves history, hiking, and exploring the world. She lives in Ontario, but can often be spotted snooping about European museums or wandering the Alps with her German husband.
Loading...
or support indie stores by buying on
(This book is on backorder)