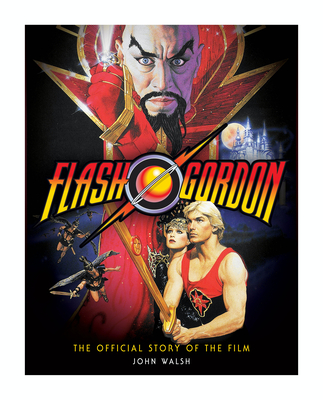 The Official Story of the Film

The official story behind the cult sci-fi hit Flash Gordon.

In 1980, the film Flash Gordon was released, becoming an instant cult favourite. One of the most quotable and beloved sci-fi films ever, it is legendary for its unique look, tone and iconic soundtrack. This beautiful, first-of-its-kind coffee table book will delve into the making of the movie and celebrate its legacy.

Featuring brand new interviews with cast and creative, including stars Sam Jones and Brian Blessed and director Mike Hodges, this stunning book features never-been-seen-before concept artwork and behind-the-scenes photography that makes it a must-have for any classic sci-fi fan.

Praise For Flash Gordon: The Official Story of the Film…

‘You will indeed have as much fun reading through this book and taking in all of the eye-popping imagery as you did with the film itself. Flash, A-ahhh!’ - Evan's Gate

John Walsh is an award winning filmmaker with a focus on social justice. His work ranges from television series to feature films. He is a double BAFTA and double Grierson Awards nominee for his groundbreaking work. John's 1989 documentary on Ray Harryhausen (Movement Into Life) is held in the Ray and Diana Foundation's archive. John also produced HD audio and film commentary recordings with Ray in his final years.
Loading...
or
Not Currently Available for Direct Purchase