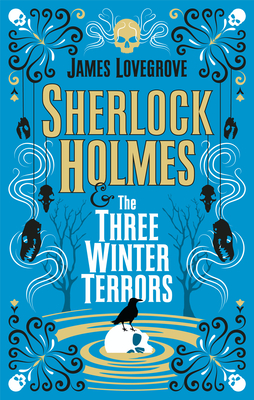 A beautifully presented sinister seasonal mystery from the acclaimed author of Sherlock Holmes & The Christmas Demon.


1889. The First Terror. At a boys’ prep school in the Kent marshes, a pupil is found drowned in a pond. Could this be the fulfilment of a witch’s curse from over two hundred years earlier?

1890. The Second Terror. A wealthy man dies of a heart attack at his London townhouse. Was he really frightened to death by ghosts?

1894. The Third Terror. A body is discovered in the dark woods near a Surrey country manor, hideously ravaged. Is the culprit a cannibal, as the evidence suggests?

These three chilling and strangely linked crimes test Sherlock Holmes’s deductive powers, and his scepticism about the supernatural, to the limit.

Praise For Sherlock Holmes and The Three Winter Terrors…


"The solid characterizations match the imaginative plotting." -Publishers Weekly (on Sherlock Holmes and The Three Winter Terrors)
"Lovegrove has nailed Doyle’s writing style… It’s as if the story were written by Doyle himself." - New York Journal of Books

"Lovegrove is a grandmaster of the Sherlock Holmes homage" - The Guardian

"A rip-roaring tale full of atmosphere, suspense and adventure" - The Sherlock Holmes Journal

"A wonderful addition to the Sherlock Holmes canon" - Criminal Element

"A ripping yarn told with style and gusto… Brilliant" - Starburst

James Lovegrove is the New York Times bestselling author of The Age of Odin. He has been short-listed for many awards including the Arthur C. Clarke Award, the John W. Campbell Memorial Award, and the Scribe Award. He won the Seiun Award for Best Foreign Language Short Story in 2011, and the Dragon Award in 2020 for Firefly: The Ghost Machine. He has written many acclaimed Sherlock Holmes novels, including Sherlock Holmes & the Christmas Demon. As well as writing books, he also reviews fiction for the Financial Times. He lives in Eastbourne in the UK.