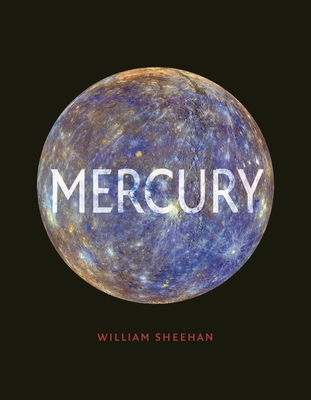 The Sun may be a mass of incandescent gas, but in the plasmatic reaches of its solar winds spins another seemingly glowing (but relatively minute) orb. The last of the five naked-eye planets discovered in ancient times, Mercury has long been an elusive, enigmatic world. As seen from the Earth, it never emerges far from the Sun, and astronomers in the telescopic era found it challenging to work out basic data such as its rotation period, the inclination of its axis, and whether or not it possessed an atmosphere.

In this fully up-to-date and beautifully illustrated account, William Sheehan describes the growth of our knowledge of planet Mercury. From the puzzles it posed for early astronomers to radar studies in the 1960s, and from the first spacecraft fly-bys by the Mariner 10 probe in the 1970s to the latest images from the Mercury Surface, Space Environment, Geochemistry, and Ranging (MESSENGER) orbital mission between 2011 and 2015, Mercury has slowly been brought into clear focus. But although we have now mapped its surface in exquisite detail, revealing strange features like volcanic plains and water-ice deposits in craters near the poles, mysteries remain—such as why its core has the highest iron content of any body of the Solar System. Rather than growing duller on closer acquaintance, this most mercurial of planets continues to fascinate us, offering important clues to scientists as they seek to better understand the origin and evolution of the Earth.

"Mercury, the Solar System’s innermost planet, was spotted in antiquity but remained an enigma until the 1960s. Science historian Sheehan’s portrait of the body (known in ancient Greece as the “scintillating one” for its flicker) reveals it as an airless iron world with an eccentric orbit. He interleaves discoveries, from Johannes Kepler’s prediction of a transit of Mercury in the seventeenth century to NASA’s MESSENGER probe, which relayed gorgeous images and data (such as the presence of a wealth of volatile compounds on the surface) before crashing on the planet in 2015."
— Barbara Kiser

"Sheehan's history of observation and discovery is recommended reading . . . The journey to Mercury, seen through time's telescope, has been an undertaking of centuries."
— Laurence Marschall

"Sheehan has done a brilliant job. . . . Add to that top-quality production standards and some lovely photographs from the Mariner and MESSENGER missions, and the result is a book that easily convinced me the Solar System’s ‘least interesting’ planet is still a pretty fascinating place."
— Brian Clegg

“There are fewer than two dozen books devoted to Mercury and this new one is easily the best introduction to the innermost planet, published at a time when a new space mission is underway. In six engaging chapters Sheehan takes us on an historical path of discovery, from a time when the planet was merely a shy, naked-eye enigma to the revelation of the iron-cored and battered rocky world explored by Mariner and MESSENGER. . . . After a thorough survey of the surface of Mercury—revealed in its geographical and geological entirety only since 2009—Sheehan concludes with an engaging history of the still more enigmatic world of Vulcan, the mythical innermost planet. . . . Rich in anecdote and illustration, this is a fine new book which is to be strongly recommended.”
— Richard McKim

“In this fully up-to-date and beautifully illustrated account, Sheehan describes the growth of our knowledge of planet Mercury. From the puzzles it posed for early astronomers to radar studies in the 1960s, and from the first spacecraft fly-bys by the Mariner 10 probe in the 1970s to the latest images from the Mercury Surface, Space Environment, Geochemistry, and Ranging (MESSENGER) orbital mission between 2011 and 2015, Mercury has slowly been brought into clear focus.”
— Nelson Noven

“This well-written account could inspire scientifically-inclined youngsters to think about a career in astronomy. . . . Suitably embellished with diagrams, historical plates, and superb color images. . . . The pictures are quite delightful and whet the appetite for future revelations by BepiColombo. . . . This beautifully produced and modestly inexpensive book concludes with a glossary, an appendix of basic data on the planet, a list of craters, a set of endnotes, and full index. All in all, a splendid primer for those future astronomers.”
— Observatory Magazine

"Sheehan has crafted a brief but very informative summary of what we know about the planet Mercury and how we know it, adding to an already impressive list of books on planetary astronomy he has authored or coauthored. The new book is successfully aimed at a popular audience, but readers with prior knowledge of astronomy or planetary sciences will follow his narratives more easily. . . . This largely chronological organization from early myths to modern spacecraft works well because the understanding of Mercury grew in highly episodic fashion: key discoveries were generally separated from one another by decades of relatively little advancement. The book is lavishly illustrated . . . It is a quick, interesting, and authoritative read. Recommended."
— Choice

"As an historian of astronomy, Sheehan gives us a thorough survey of the early telescopic observations of Mercury. This is an unrelieved tale of hope and delusion related in such an engaging way that much of the book is a genuine page-turner. . . . A chapter on spacecraft observations of Mercury is very finely illustrated, with numerous color images. The author gives us an excellent idea of our current physical understanding of the planet, including its internal iron core, weak magnetic field, and existence of ice in some crater floors where the Sun never shines to heat it up. . . . With its up-to-date results and historical perspective, this is certainly the finest and most readable book available on our innermost planet."
— Journal of Astronomical History and Heritage

William Sheehan is a psychiatrist, historian of astronomy, and amateur astronomer who has been an observer of Mercury and the other planets for many years. He is the author or coauthor of twenty books, including Planets and Perception, The Planet Mars, Discovering Pluto, and Jupiter, the last also published by Reaktion Books. He lives in Flagstaff, AZ, and Asteroid 16037 is named Sheehan in his honor.
Loading...
or support indie stores by buying on