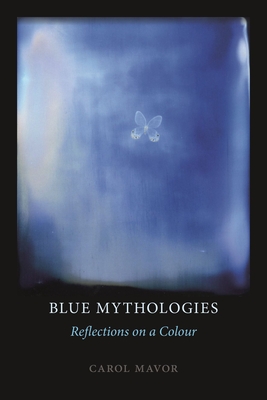 Reflections on a Colour

The sea, the sky, the veins of your hands, the earth when photographed from space—blue sometimes seems to overwhelm all the other shades of our world in its all-encompassing presence.

The blues of Blue Mythologies include those present in the world’s religions, eggs, science, slavery, gender, sex, art, the literary past, and contemporary film. Carol Mavor’s engaging and elegiac readings in this beautifully illustrated book take the reader from the blue of a newborn baby’s eyes to Giotto’s frescoes at Padua, and from the films of Derek Jarman and Krzysztof Kiéslowski to the islands of Venice and Aran.

In each example Mavor unpicks meaning both above and below the surface of culture. In an echo of Roland Barthes’s essays in Mythologies, blue is unleashed as our most familiar and most paradoxical color. At once historical, sociological, literary, and visual, Blue Mythologies gives us a fresh and contemplative look into the traditions, tales, and connotations of those somethings blue.

Praise For Blue Mythologies: Reflections on a Colour…

"Julia Kristeva has said that 'color is not zero meaning: it is excess meaning.' Art historian Mavor’s evocative and eclectic collection of essays demonstrates how true this is. . . . Drawing on the history of art, photography, literature, and her own memories, Mavor dives deep into an ocean of blueness. . . . Sumptuously illustrated throughout, Mavor’s writing—inspired by Roland Barthes’s Mythologies—is rich with insights, both theoretical and personal. . . . To quote Colette, Mavor is without doubt a true 'connoisseur of blue.'"
— Guardian

“Draws upon many artists and writers. . . . This fine, multidisciplinary work explores the color’s aesthetic and emotional resonances from a fresh perspective.”
— Publishers Weekly

“Carol Mavor’s quirky Blue Mythologies reveals an inherently paradoxical color. . . . An exciting literary treasure hunt that maps out the color blue as a pathway to experience and memory.”
— Shelf Awareness

“[An] evocative new book—a work which wanders at will over a world of blue. Mavor’s book could hardly be less constrained by its divided subject. Hers is a stream of consciousness, illustrated by a lavish wash of colour reproductions.”
— Times Higher Education

“In Blue Mythologies, Carol Mavor provides her own ‘reflections’ on blue, as her subtitle reads, employing as a guide no discernible chronology but for the admirable compass of her own affective and intellectual sensibilities. . . . Mavor has developed a style that marries the erudition of scholarly writing with the intimacy of a diary. . . . In twenty-two chapters, illustrated throughout by lavish reproductions of everything from fourteenth-century frescoes to twenty-first-century contemporary daguerreotypes, Mavor is at her somersaulting best, moving effortlessly between disciplines and interpretive paradigms. . . . The success of her book is to coax us into having a less complacent attitude to our own contradictory investments, even when it comes to something as apparently innocuous as a color.”
— Dylan J. Montanari

"Mavor pushes her intuitions and interpretations further than they want to go, so that they come back breathless and bruised, with new tales to tell…Blue Mythologies is an act of enchantment—of author and reader alike.”
— Brian Dillon

“Mavor offers an engaging and poetic exploration of the color blue. Like Joseph Cornell assembling one of his boxes, Mavor articulates this metaphorical exploration in a series of short chapters. As expected, the symbolic meanings and psychological effects of the color are introduced. Less expected is the wide range of media, including literature; music; poetry; film; objects; places; and individuals. Theory, notably that of Roland Barthes (whose Mythologies inspired the book’s structure), is integrated skillfully.”
— Choice

“Describing a color is the challenge Carol Mavor takes up in Blue Mythologies, and more obliquely in Black and Blue, and she does it beautifully. These two books are the latest blossoms Mavor has cultivated, works that confirm the tenderness of her critical passions. She is a kissing cousin of Eve Kosofsky Sedgwick and Susan Stewart, in her attention to touch and affect, in her sensitivity to her own emotions and sense perceptions in her apprehension of art.”
— Critical Quarterly

“Carol Mavor’s work is the closest to that of Roland Barthes we are ever likely to have. What I like about it is that it is as ‘artistic’ as the art which is its subject matter. Carol Mavor not only studies ‘blue,’ she bleeds it.”
— Hayden V. White, University of California, Santa Cruz

Carol Mavor is professor of art history and visual culture at the University of Manchester. She has published widely on photography, cinema, color, and childhood. She is the author of Black and Blue: The Bruising Passion of Camera Lucida, La Jetée, Sans soleil, and Hiroshima mon amour.
Loading...
or
Not Currently Available for Direct Purchase