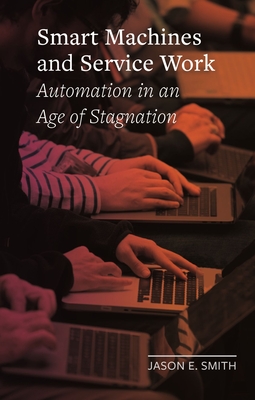 Automation in an Age of Stagnation (Field Notes)

In recent decades digital devices have reshaped daily life, while tech companies’ stock prices have thrust them to the forefront of the business world. In this rapid, global development, the promise of a new machine age has been accompanied by worries about accelerated joblessness thanks to new forms of automation. Jason E. Smith looks behind the techno-hype to lay out the realities of a period of economic slowdown and expanding debt: low growth rates and an increase of labor-intensive jobs at the bottom of the service sector. He shows how increasing inequality and poor working conditions have led to new forms of workers’ struggles. Ours is less an age of automation, Smith contends, than one in which stagnation is intertwined with class conflict.

Praise For Smart Machines and Service Work: Automation in an Age of Stagnation (Field Notes)…

"One of the very best books on the social consequences of technological change I have read, far more insightful than the technology books that get so much attention in the mainstream press."
— Tony Smith

"In his book Smart Machines and Service Work, Smith offers a reality check to the effects of automation in an age of stagnated production and wages. . . . Workers usurped from administrative as well as industrial roles have recomposed themselves on behalf of service industries as a massively expanded, desiccated and low-paid servant class, the new 'precariat.' . . . Smith dials up his Marx to probe several fascinating and troubling effects of this current dynamic."
— Morning Star

"One thing that has puzzled academic economists is why, given the spread in recent years of IT, AI, and automation generally, productivity has hardly gone up. In Smart Machines and Service Work: Automation in an Age of Stagnation, Smith offers an explanation which also challenges those like Paul Mason who see a society of abundance and leisure as in the process of gradually evolving."
— Socialist Standard

There is indeed some critical work to be done. I, for one, welcome the recent 'critical turn' in automation studies. And I think that a decade from now, a far-sighted book like Smart Machines and Service Work will prove to be the most lasting contribution to this important debate."
— Dominique Routhier

"To understand the future, we must first understand the present. In Smart Machines and Service Work,Smith critically examines the rhetoric on automation, robots taking over jobs and a future without work in the context of a stagnating global economy. . . . Smith combines a detailed theoretical argumentation with rigorous empirical analysis to produce an enlightening explanation of the technological, economic, and social conditions that have shaped and continue to shape the world of work today. Overall, Smart Machines and Service Work is targeted critique of today’s decontextualized automation rhetoric and an impressively broad analysis of the US economy and labor market."
— Sigurd M. N. Oppegaard

"A novel and persuasive explanation of why the technological advances of the computer age have been accompanied by a significant slowdown in productivity growth, with an increasing proportion of the labor force in low productivity—and low paid—service industries. This well-written book should be of interest to everyone who wants to understand—and end—the 'near depression' of the US economy."
— Fred Moseley, professor of economics, Mount Holyoke College, author of "Money and Totality"

"The technological advances of the last four decades have brought only insignificant productivity gains. This 'productivity paradox' remains an abiding mystery in mainstream economics. Smith removes the mystery, explaining how rates of investment, economic growth, and real wage increases have been abysmally low not despite capitalism's technological dynamism, but because of it. This important book should be read by anyone interested in the social consequences of technological change today."
— Tony Smith, professor of philosophy, Iowa State University, author of "Technology and Capital in the Age of Lean Production"