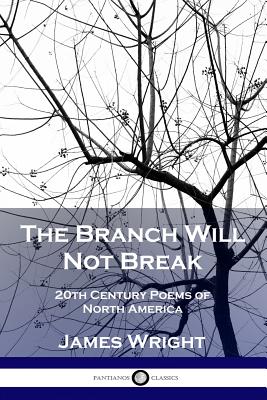 The Branch Will Not Break

The Branch Will Not Break is a reflective anthology of poems which evokes its author's upbringing in poverty-stricken Ohio during the 1930s and 1940s.

Representing a radical and innovative departure from the more conventional and nature-orientated works of his earlier career, this collection sees James Wright embark on sudden narrative shifts while conjuring evocative imagery full of implication. Often, the poems begin with a description of a person or object - after these initial verses, we find a blossoming of imagery. This collection was the result of years of collaboration Wright enjoyed with fellow poet Robert Bly.

Economical with words, Wright's poems are generally short but unfailing in evocation and implication. Some of the shortest, most rhythmic works in this collection carry shades of Eastern poetry such as Haiku. Others declare a raw scene, image and meaning in an appealing and deceptively simple manner. Readers will find pleasure in Wright's gifts, qualitative, intense and imbued with brevity as they often are.

This collection formed a fine compliment to the Beat and New York School poetry of the 1950s and early 1960s - isolated geographically from his contemporaries, James Wright's ability gave significance to the Midwest; prior to this collection, modern poets mostly inhabited the east and west coasts of North America.