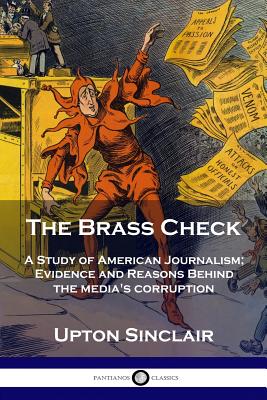 Turning his muckraking talents to journalism itself, Upton Sinclair exposes a variety of the news media's ingrained biases and its agenda-serving corruption.

In his famous book The Jungle, Upton Sinclair became famous for exposing filthy and inhumane conditions in the American meat packing industry at the turn of the 20th century. Following these revelations, new laws were made protecting factory workers and the conditions they labored in. Sinclair afterwards became a figure for condemnation - his personal life was scrutinized and made the subject of spurious gossip and rumor, the cause being that the vast majority of newspaper corporations opposed his pro-worker, pro-regulation views.

The title of this book alludes to a common practice in brothels: those frequenting these establishments would buy 'brass checks' to hand to the woman of their choice. Sinclair draws a parallel between such customers and the proprietors of the media, who delegate the promotion of their political, financial and social agendas to journalists willing to propagate such ideas.

Drawing on experiences of his own and of others, Sinclair presents here a convincing litany of claims backed by evidence, against a mass media corrupted by narrow special interests and their funds. He proposes several solutions; namely a law that corrections be given equal prominence to lies, and the unionization of reporters. Though The Brass Check was widely - and wrongly - condemned for inaccuracy in the years following its publication in 1919, it is today considered a prescient account of close relations between powerful corporations and the mass media.