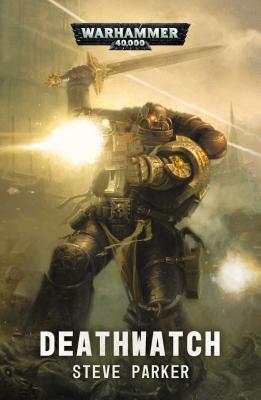 Action packed novel featuring the galaxies foremost alien hunting taskforce, the Deathwatch. Led by Librarian Karras, the elite alien-hunting Talon Squad must penetrate a genestealer lair and put the abominations to the flame or face the consequences of an entire planet's extinction.

Gathered from the many Chapters of Space Marines, the Deathwatch are elite, charged with defending the Imerium of Man from aliens. Six Space Marines, strangers from different words, make up Talon Squad. On 31-Caro, a new terror has emerged, a murderous shadow that stalks the dark, and only the Deathwatch can stop it. Underthe direction of a mysterious Inquisitor Lord known only as Sigma, they must cleanse this planet or die in the attempt.

Originally hailing from the rain-swept land of the Scotland, Steve Parker currently resides in Tokyo, Japan, where he runs a specialist coaching business for men and writes genre fiction.
His published works include the novels Rebel Winter, Gunheads, Rynn's World, Deathwatch, Shadowbreaker, the novella Survivor, and several short stories featuring the Deathwatch kill-team Talon Squad, the Crimson Fists and various Astra Militarum regiments.
or support indie stores by buying on