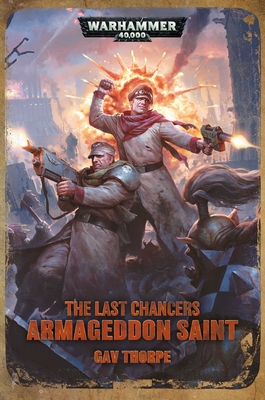 After a 16 year absence the Last Chancers are back!

Lieutenant Kage of the 13th Penal Legion is dead, his charred remains lost to the depths of a fiery chasm. But as his battalion – the Last Chancers – mourns, a new hero rises from the ashes. The Burned Man.
Kage’s miraculous survival attracts a cult of desperate followers, who believe him sent to the ork-infested world of Armageddon by the God-Emperor Himself. However, the rampaging greenskins are not the only threat to his new life. The ruthless Colonel Schaeffer, his former commander, has seen through his ploy and will stop at nothing to bring his errant charge to justice…
Yet unbeknownst to both men, darker powers yearn to see Armageddon bathed and bound in blood. Kage and Schaeffer must put the ghosts of their past aside and unite, or see the Emperor’s Light forevermore extinguished upon this tortured world.

Gav Thorpe is the author of the Horus Heresy novels The First Wall, Deliverance Lost, Angels of Caliban and Corax, as well as the novella The Lion, which formed part of the New York Times bestselling collection The Primarchs, and several audio dramas. He has written many novels for Warhammer 40,000, including Ashes of Prospero, Imperator: Wrath of the Omnissiah and the Rise of the Ynnari novels Ghost Warrior and Wild Rider. He also wrote the Path of the Eldar and Legacy of Caliban trilogies, and two volumes in The Beast Arises series. For Warhammer, Gav has penned the End Times novel The Curse of Khaine, the Warhammer Chronicles omnibus The Sundering, and recently penned the Age of Sigmar novel The Red Feast. In 2017, Gav won the David Gemmell Legend Award for his Age of Sigmar novel Warbeast. He lives and works in Nottingham.
Loading...
or
Not Currently Available for Direct Purchase