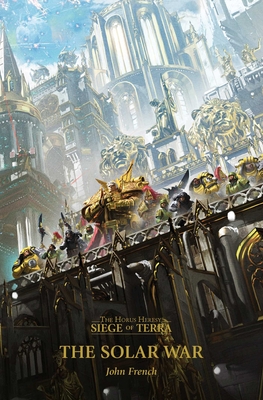 Explore the final stages of the New York Times Bestselling Series The Horus Heresy in this fantastic miniseries, a must have for all fans!

After seven years of bitter war, the end has come at last for the conflict known infamously as the Horus Heresy. Terra now lies within the Warmaster’s sights, the Throneworld and the seat of his father’s rule. Horus’ desire is nothing less than the death of the Emperor of Mankind and the utter subjugation of the Imperium. He has become the ascendant vessel of Chaos, and amassed a terrible army with which to enact his will and vengeance. But the way to the Throne will be hard as the primarch Rogal Dorn, the Praetorian and protector of Terra, marshals the defences. First and foremost, Horus must challenge the might of the Sol System itself and the many fleets and bulwarks arrayed there. To gain even a foothold on Terran soil, he must first contend the Solar War. Thus the first stage of the greatest conflict in the history of all mankind begins.

John French is the author of several Horus Heresy stories including the novels The Solar War, Praetorian of Dorn, Tallarn and Slaves to Darkness, the novella The Crimson Fist, and the audio dramas Dark Compliance, Templar and Warmaster. For Warhammer 40,000 he has written Resurrection, Incarnation and Divination for The Horusian Wars and three tie-in audio dramas – the Scribe award-winning Agent of the Throne: Blood and Lies, as well as Agent of the Throne: Truth and Dreams and Agent of the Throne: Ashes and Oaths. John has also written the Ahriman series and many short stories.
Loading...
or support indie stores by buying on