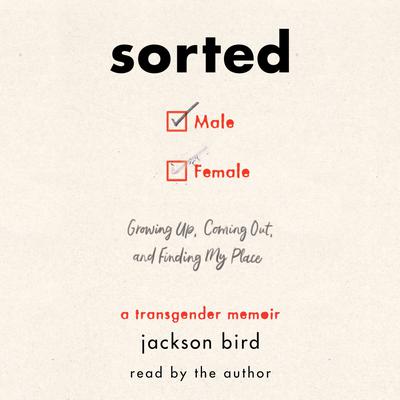 An unflinching and endearing memoir from LGBTQ+ advocate Jackson Bird about how he finally sorted things out and came out as a transgender man.

When Jackson Bird was twenty-five, he came out as transgender to his friends, family, and anyone in the world with an internet connection.

Assigned female at birth and raised as a girl, he often wondered if he should have been born a boy. Jackson didn’t share this thought with anyone because he didn’t think he could share it with anyone. Growing up in Texas in the 1990s, he had no transgender role models. He barely remembers meeting anyone who was openly gay, let alone being taught that transgender people existed outside of punchlines.

In this “soulful and heartfelt coming-of-age story” (Jamia Wilson, director and publisher of the Feminist Press), Jackson chronicles the ups and downs of growing up gender-confused. Illuminated by journal entries spanning childhood to adolescence to today, he candidly recalls the challenges and loneliness he endured as he came to terms with both his gender and his bisexual identity.

With warmth and wit, Jackson also recounts how he navigated the many obstacles and quirks of his transition—like figuring out how to have a chest binder delivered to his NYU dorm room and having an emotional breakdown at a Harry Potter fan convention. From his first shot of testosterone to his eventual top surgery, Jackson lets you in on every part of his journey—taking the time to explain trans terminology and little-known facts about gender and identity along the way.

“A compassionate, tender-hearted, and accessible book for anyone who might need a hand to hold as they walk through their own transition or the transition of a loved one” (Austin Chant, author of Peter Darling), Sorted demonstrates the power and beauty in being yourself, even when you’re not sure who “yourself” is.

Jackson Bird is a YouTube creator and LGBTQ+ advocate dedicated to demystifying the transgender experience. His TED Talk “How to talk (and listen) to transgender people” has been viewed over a million times. Jackson is a recipient of the GLAAD Rising Star Digital Innovator Award and lives in New York City. You can follow him online @JackIsNotABird.