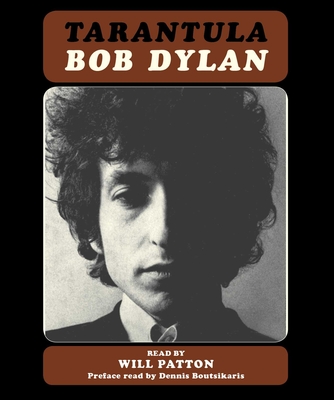 Bob Dylan, Will Patton (Read by), Dennis Boutsikaris (Preface by)

Never before on audio! Music legend Bob Dylan’s only work of fiction—a combination of stream-of-consciousness prose, lyrics, and poetry that illuminates the creative process of one of the most influential musicians and songwriters of our time—finally comes to audio in a magnificent performance by award-winning narrator Will Patton!

Written in 1966, Tarantula is a collection of poems and prose that evokes the turbulence of its time and provides a unique perspective on Bob Dylan’s creative evolution. It captures Dylan at a crucial juncture in his artistic development, showcasing the imagination of a revolutionary musician who was able to combine the humanity and compassion of his folk music roots with the surrealism of modern art and the intensity of the Delta blues. Angry, funny, and elusive, the poems and prose in this collection reflect the concerns found in Dylan’s most seminal music: a sense of protest, verbal ingenuity and spontaneity, and a belief in the artistic legitimacy of chronicling everyday life and the rhythms of the street and in the air.

Will Patton’s film credits include Halloween, Boarding School, Megan Leavey, American Honey, Meek’s Cutoff, A Mighty Heart, Remember the Titans, The Mothman Prophecies, Armageddon, and No Way Out. He starred in Swamp Thing on the DC Universe streaming platform and was seen in five seasons of the TNT series Falling Skies. He has won Obie Awards for his performances in Fool for Love and What Did He See? He is also known for his audiobook recordings of the work of Stephen King, James Lee Burke, Denis Johnson, and William Faulkner.

Dennis Boutsikaris won an OBIE Award for his performance in Sight Unseen and played Mozart in Amadeus on Broadway. Among his films are *batteries not included, The Dream Team, and Boys On the Side. His many television credits include And Then There Was One, Chasing the Dragon and 100 Center Street.
Loading...
or support indie stores by buying on