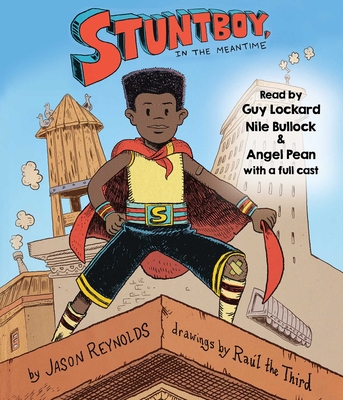 Stuntboy, in the Meantime

Praise For Stuntboy, in the Meantime…

"With endless energy, verve, and style, Guy Lockard is a total superstar narrating this middle-grade novel about Portico Reeves, aka Stuntboy."
— Winner of an AudioFile Earphones Award, AudioFile Magazine

"This adaptation is a special and unique audio experience, and along with Jason Reynolds's smart, funny, empathetic writing that meets kids where they are, it's guaranteed to catch and keep the attention of even the most reluctant reader or listener."
— Winner of an AudioFile Earphones Award, AudioFile Magazine

Jason Reynolds is a #1 New York Times bestselling author, a Newbery Award Honoree, a Printz Award Honoree, a two-time National Book Award finalist, a Kirkus Award winner, a Carnegie Medal winner, a two-time Walter Dean Myers Award winner, an NAACP Image Award Winner, a two-time Odyssey Award Honoree, the recipient of multiple Coretta Scott King honors, and the Margaret A. Edwards Award. He was also the 2020–2022 National Ambassador for Young People’s Literature. His many books include All American Boys (cowritten with Brendan Kiely); When I Was the Greatest; The Boy in the Black Suit; Stamped; As Brave as You; For Every One; the Track series (Ghost, Patina, Sunny, and Lu); Look Both Ways; Stuntboy, in the Meantime; Ain’t Burned All the Bright, and My Name Is Jason. Mine Too. (both cowritten with Jason Griffin); and Long Way Down, which received a Newbery Honor, a Printz Honor, and a Coretta Scott King Honor. He lives in Washington, DC. You can find his ramblings at JasonWritesBooks.com.
Loading...
or support indie stores by buying on
(This book is on backorder)