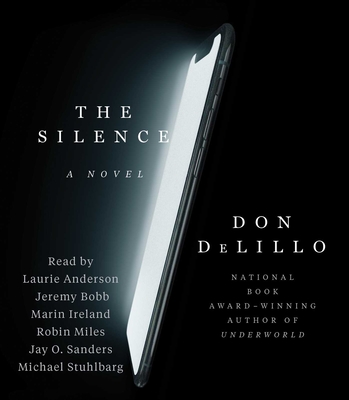 From one of the most dazzling and essential voices in American fiction, a timely and compelling novel set in the near future about five people gathered together in a Manhattan apartment, in the midst of a catastrophic event.

Don DeLillo completed this novel just weeks before the advent of Covid-19. The Silence is the story of a different catastrophic event. Its resonances offer a mysterious solace.

It is Super Bowl Sunday in the year 2022. Five people, dinner, an apartment on the east side of Manhattan. The retired physics professor and her husband and her former student waiting for the couple who will join them from what becomes a dramatic flight from Paris. The conversation ranges from a survey telescope in North-central Chile to a favorite brand of bourbon to Einstein’s 1912 Manuscript on the Special Theory of Relativity.

Then something happens and the digital connections that have transformed our lives are severed.

What follows is a dazzling and profoundly moving conversation about what makes us human. Never has the art of fiction been such an immediate guide to our navigation of a bewildering world. Never have DeLillo’s prescience, imagination, and language been more illuminating and essential.

"A full cast propels DeLillo's latest audiobook, which portrays our current relationship with technology. At a time in the close future, an unexplained technology disruption occurs, impacting the characters of this work at various levels. An international flight to New York crash-lands; the survivors are treated in a clinic that is also affected by the blackout. The Super Bowl broadcast goes dark, forcing neighbors to interact. DeLillo reflects on the nature of humanity, and who we've become. Marin Ireland's centering narrative anchors the stellar performances. Memorable characters include a gruff sports gambler who is reduced to watching a blank screen, portrayed by Jay O. Sanders, and a couple who survive the crash and are left to observe the aftermath, portrayed by Jeremy Bobb and Robin Miles. The collective performances make this story resonate more deeply."
— Winner of an AudioFile Earphones Award, AudioFile Magazine

Laura “Laurie” Anderson is an American avant-garde artist, composer, musician, and film director whose work spans performance art, pop music, and multimedia projects. She is a graduate of Barnard College and Columbia University, where she obtained an MFA in sculpture. Anderson started dating Reed in 1992, and was married to him from 2008 until his death in 2013.
Loading...
or support indie stores by buying on