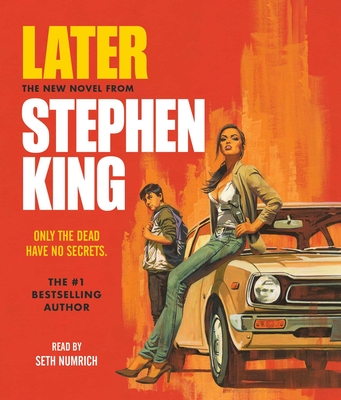 The son of a struggling single mother, Jamie Conklin just wants an ordinary childhood. But Jamie is no ordinary child. Born with an unnatural ability his mom urges him to keep secret, Jamie can see what no one else can see and learn what no one else can learn. But the cost of using this ability is higher than Jamie can imagine—as he discovers when an NYPD detective draws him into the pursuit of a killer who has threatened to strike from beyond the grave.

Later is Stephen King at his finest, a terrifying and touching story of innocence lost and the trials that test our sense of right and wrong. With echoes of King’s classic novel, It, Later is a powerful, haunting, unforgettable exploration of what it takes to stand up to evil in all the faces it wears.

"Seth Numrich portrays Jamie Conklin, a young man who sees dead people and can compel them to answer questions truthfully. As a child, Jamie is able to help his mother, Tia, avoid financial ruin. But then Tia's girlfriend, an NYPD detective, asks him to force a dead man to reveal the location of a hidden bomb. This unleashes sinister forces that stalk Jamie for years. As the 20-something Jamie remembers these traumatic supernatural events, Numrich sounds appropriately melancholic and haunted. But he also illuminates moments of levity and warmth, mostly in Jamie's musings about growing up and in his relationship with his mother. King's words and Numrich's performance reinforce the idea that kindness can still shine in a world full of horrors."
— Winner of an AudioFile Earphones Award, AudioFile Magazine

"Voicing Jamie is Seth Numrich, who brings all his classical theater training to what could have been the throwaway role of a kid who mostly tries to ignore an ability he didn’t ask for. Numrich, who played Benjamin Tallmadge in four seasons of AMC’s 'Turn: Washington’s Spies,' embodies Jamie from ebullient first-grader to terrified but determined teen, nailing the evolution of a boy trying to solve his own mystery. The story can be whimsical and funny, thoughtful and alarming, and Numrich is perfectly in step."
— St. Louis Post-Dispatch