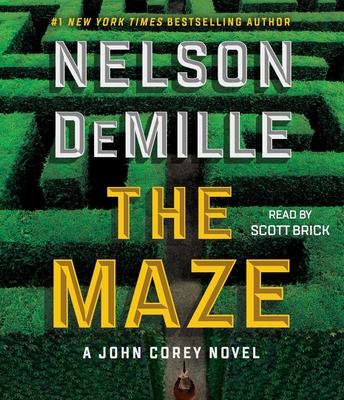 The Maze (A John Corey Novel)

Nelson DeMille introduced readers to NYPD Homicide Detective John Corey in Plum Island, who we first meet sitting on the back porch of his uncle’s waterfront estate on Long Island, recovering from wounds incurred in the line of duty.

Six novels later, The Maze opens with Corey on the same porch, having survived new law enforcement roles and romantic relationships—wiser and more sarcastic than ever. Corey is restless and looking for action, so when his former lover Detective Beth Penrose appears with a job offer, Corey has to once again make some decisions about his career—and about reuniting with Beth.

Inspired by and based on the actual and still-unsolved Gilgo Beach murders, The Maze takes us on a dangerous hunt for an apparent serial killer who has murdered nine—and maybe more—sex workers and hidden their bodies in the thick undergrowth on a lonely stretch of beach.

As Corey digs deeper into this case, he comes to suspect that the failure of the local police to solve this sensational mystery may not be a result of their incompetence—it may be something else. Something more sinister.

The Maze features John Corey’s politically incorrect humor, matched by his brilliant and unorthodox investigative skills, along with the shocking plot twists that are the trademark of the bestselling author Nelson DeMille, “the master of smart, entertaining suspense” (Bookreporter).

Praise For The Maze (A John Corey Novel)…

"A string of deaths that has confounded federal and state law enforcement is the ideal backdrop for the latest Nelson DeMille thriller. It especially shines as an audiobook performed by Scott Brick. Brick’s on-point ability to time every phrase perfectly highlights NYPD Detective John Corey’s distinct personality. DeMille’s other characters are also well defined, particularly Detective Beth Penrose, whose romantic advances help bring Corey out of retirement. Another memorable character as portrayed by Brick is seductive secretary Amy Lang, who works for the detective agency that appears to be at the center of the murders. Brick ties the story together by enhancing the dialogue and maintaining a pace that keeps the book moving."
— AudioFile Magazine

Nelson DeMille is the New York Times bestselling author of twenty-two novels, seven of which were #1 New York Times bestsellers. His novels include The Maze, The Deserter (written with Alex DeMille), The Cuban Affair, Word of Honor, Plum Island, The Charm School, The Gold Coast, and The General’s Daughter, which was made into a major motion picture, starring John Travolta and Madeleine Stowe. He has written short stories, book reviews, and articles for magazines and newspapers. Nelson DeMille is a combat-decorated US Army veteran, a member of Mensa, Poets & Writers, and the Authors Guild, and past president of the Mystery Writers of America. He is also a member of the International Thriller Writers, who honored him as 2015 ThrillerMaster of the Year. He lives on Long Island with his family.
Loading...
or support indie stores by buying on