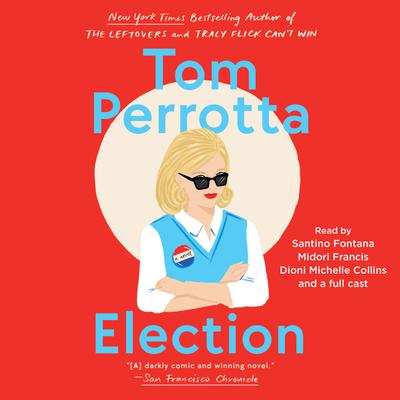 Never before on audio! The beloved bestselling dark comedy that became a Reese Witherspoon screen classic, Tom Perrotta's breakthrough novel about the American democratic process as brought to life in a suburban New Jersey high school finally comes to audio, on the eve of the Scribner and S&S Audio publication of its eagerly-awaited sequel, Tracy Flick Can't Win!

Tracy Flick wants to be President of Winwood High. She’s one of those ambitious girls who finds time to do it all: edit the yearbook, star in the musical, sleep with her English teacher. But another teacher, staunch idealist Jim McAllister, a.k.a. “Mr. M.,” thinks the students deserve better. So he persuades Paul Warren—a well-liked, good-hearted jock—to throw in his hat. But that puts Paul’s sister Tammy in a snit. So she runs too, on an apathy platform, before starting a real campaign...to get herself kicked out of school.

The idea was to educate the students at this suburban New Jersey school in the democratic process and the American way. But with all the sex scandals, smear campaigns, and behind-the-scenes power brokers at Winwood High, it doesn’t look as if they need any lessons....
Loading...