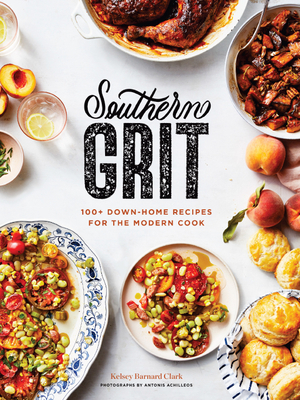 100+ Down-Home Recipes for the Modern Cook

In Southern Grit, Kelsey Barnard Clark presents more than 100 recipes that are made to be shared with family and friends. Indulge your loved ones in delicious modern Southern meals, including Bomb Nachos, Savannah Peach Sangria, Roasted Chicken and Drippin' Veggies, and six variations of Icebox Cookies.

Featuring beautifully styled shots of finished dishes and the Southern home style, as well as Kelsey Barnard Clark's tips for stocking the pantry, entertaining with ease, and keeping your house guest-ready (with or without toddlers).

Readers of Magnolia Table by Joanna Gaines and Whiskey in a Teacup by Reese Witherspoon, fans of Kelsey Barnard Clark and her stint on Top Chef, and any home cooks who love cooking and serving Southern food, have a young family, and like to host guests will appreciate these modern homemaking tips, the approachable instruction, and the contemporary repertoire of recipes that brim with flavors of the Deep South.

SOUTHERN FOOD IS PERENNIALLY POPULAR: With 100 simple recipes that cover all occasions, plus entertaining tips throughout the book, Southern Grit has wide-ranging appeal for the broad audience of people who love Southern flavors.

TOP CHEF WINNER & FAN FAVORITE: Kelsey Barnard Clark is a self-branded "spicy Joanna Gaines." Her personality and talent were showcased on Top Chef, leading her to win the title of Fan Favorite in addition to winning the season overall—only the second time in 16 seasons when that's happened.

Praise For Southern Grit: 100+ Down-Home Recipes for the Modern Cook…

“Top Chef winner and restaurateur Kelsey Barnard Clark recounts the story of her Alabama upbringing, New York City training, and the return to her roots in this exciting debut collection of family recipes updated with a modern twist…. Those looking to bring some Southern flair to their cooking will find much to relish in this appetizing guide.” -Publishers Weekly

Kelsey Barnard Clark is a spicy Southern chef and mother hailing from Dothan, Alabama. After two years of parent-mandated "real college," Kelsey left the Deep South to learn from world-class chefs at the Culinary Institute of America in New York. She fine-tuned her skills in Manhattan's top restaurants, Café Boulud and Dovetail, before returning to her roots in Alabama to launch her catering business and restaurant, now known as KBC. Recently, Kelsey competed in Top Chef Season 16—nine months after having her first child. She became the fourth woman and first Southerner to win the Top Chef title. In addition, she became the second person in sixteen seasons to win both the title and Fan Favorite.
Loading...
or support indie stores by buying on
(This book is on backorder)