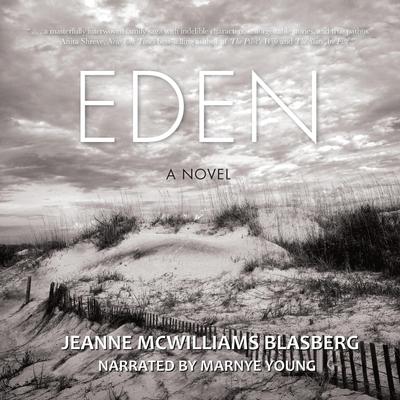 Becca Meister Fitzpatrick, wife, mother, grandmother, and pillar of the community, is the dutiful steward of her family’s iconic summer tradition until she discovers her recently deceased husband squandered their nest egg. While coming to terms with what is likely to be her last season in Long Harbor, she decides to introduce the child she gave up for adoption fifty years prior to the family. Inspired by her granddaughter’s acceptance in the face of impending single-motherhood, Becca summons the courage to reveal the secret she’d been forced to bury. The question is how her daughter, Rachel, will react. They’d always had a strained relationship, made rockier when Rachel came home from college with an unplanned pregnancy of her own.

Eden is the account of the days leading up to the Fourth of July weekend, as Becca prepares to disclose her secret, and her son and brothers conspire to put the estate on the market, interwoven with the century old history of Becca’s family, of her parents’ beginnings and ascent into affluence, and of her mother’s own secret struggles in the grand home her father named “Eden.”

Jeanne Blasberg is the author of Eden: A Novel, winner of the Beverly Hills Book Awards for Women’s Fiction and finalist for the Benjamin Franklin Award for Best New Voice in Fiction and Sarton Women’s Book Award for Historical Fiction. After graduating from Smith College, she embarked on a career in finance. Though she worked primarily with numbers, she was always interested in writing. After holding jobs on Wall Street, at Macy’s, and writing case studies at Harvard Business School, she turned her attention to writing memoir and fiction. Blasberg founded the Westerly Memoir Project. She sits on the board of the Boston Book Festival and Grub Street, one of the country’s preeminent creative writing centers. She and her husband have three grown children and split time between Boston, MA, and Westerly, RI. She loves to travel, play squash, ski, and take in the glorious sunsets over Little Narragansett Bay.