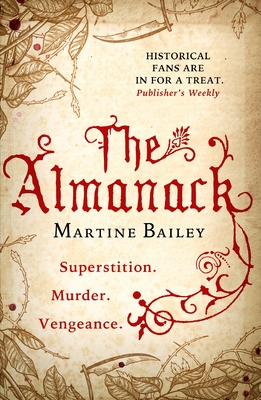 "Bailey's prose sparkles" The Times "Puzzle solvers and historians will love this mystery" Booklist Superstition. Murder. Vengeance. Tabitha Hart earns a scandalous living in London, with whichever gentleman has enough coin for her company. But in the summer of 1752, her mother urgently summons her home to the village of Netherlea and, with reluctance, she returns. However, she is greeted by the news that her mother has died in disturbing circumstances. Finding cryptic notes in her mother's almanack, Tabitha is determined to discover the truth, but the superstitious villagers are wary of her. Only the enigmatic Nat Starling is prepared to join her, as she sets out to uncover her mother's killer. But soon the summer draws to a close and snow sets in, cutting off Netherlea from the outside world. As an unknown killer prophesies their deaths, Tabitha and Nat now face the darkest hours of their lives.

Martine Bailey is the author of two previous mysteries: An Appetite for Violets, selected by Booklist as one of their Top Ten crime fiction debuts, and A Penny Heart, which was one of the Sunday Times Top Summer Reads in 2015. She lives in Cheshire, England.
or support indie stores by buying on
Copyright © 2020 American Booksellers Association