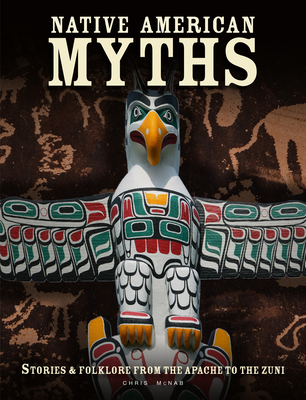 Stories & Folklore from the Apache to the Zuni

Native American Myths is a wide-ranging examination of mythology among the First Nations people in Canada and the United States, featuring examples from Apache, Blackfoot, Cherokee, Cheyenne, Cree, Inuit, Lakota, Navajo, Sioux, and many other tribes. Arranged by region and tribe, the book includes creation myths and heroic journeys, and features a huge range of characters from benign harvest spirits to fearsome sea beasts, from ominous disembodied heads to invisible woodland creatures. There are famous figures, too, such as the trickster Coyote, the mighty Thunderbird, and the cannibalistic Algonquian monster Wendigo. Ranging from the Inuits in the North to the Apache in the South, from Tlingit in the West across to Algonquin in the East, the book delves deeply into the folklore of North America's Indigenous peoples, exploring the importance of features such as sweat lodge ceremonies, the concept of balance in The Four Directions, totem poles, and the idea of the upper world and an underworld.

Chris McNab has written more than 100 titles, primarily focused on historical and military topics. His titles include Native American Warriors, The Illustrated History of the Vietnam War, History of World War II, and Hitler's Masterplan. He also works as an educational publishing consultant, advising international agencies on how to develop their textbooks and other educational resources.
Loading...
or support indie stores by buying on