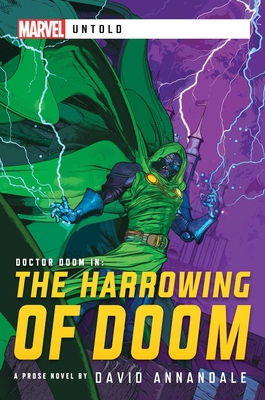 The Harrowing of Doom

Notorious villain Doctor Victor von Doom has finally found a solution for his oldest obsession: rescuing his mother’s soul from the clutches of Hell. An alliance with the reclusive sage, Maria von Helm, has provided the key to Doom’s latest invention. Fusing their super-science and sorcery, Doom has created the Harrower, a device that will open a rift and wrench his mother’s soul from the netherworld. Back in the human world, however, rebel forces threaten to overrun Latveria and topple its dark leader – and revolution couldn’t come at a more dangerous time than when the gates of Hell itself have been unlocked.

Praise For The Harrowing of Doom: A Marvel Untold Novel…

“Truly the stuff of legend – both fun and unnerving.”
— Forbes

“Annandale has a real talent for the cinematic and the strange.” - Starburst magazine
— Starburst Magazine

DAVID ANNANDALE is a lecturer at a Canadian university on subjects ranging from English literature to horror films and video games. He is the author of many novels in the New York Times-bestselling Horus Heresy and Warhammer 40,000 universe, and a co-host of the Hugo Award-nominated podcast Skiffy and Fanty.
Loading...
or support indie stores by buying on