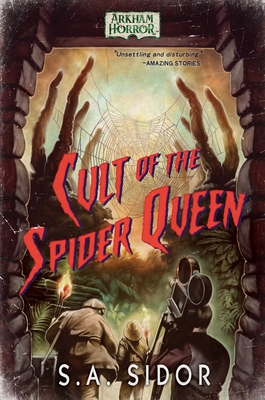 Cult of the Spider Queen

An ancient horror deep in the Amazon jungle spins a web of nightmares to ensnare adventurers, explorers, and their souls, in this skin-crawling Arkham Horror novel of cosmic dread.

When Arkham Advertiser reporter Andy van Nortwick receives a mysterious film reel in the mail, with a simple note: “Maude Brion is very much alive!”, he steps onto a path which will lead him to the brink of madness. Brion, the famous actress and film director, vanished a year ago on an ill-fated expedition into the Amazon rainforest, delving into the legend of the Spider Queen. Thrilled by the prospect of his big break, Nortwick swings the funds to launch a rescue mission. He gathers a team of explorers and a keen folklorist to bring back Brion and cement his reputation. But deep in the Amazon jungle, the boundaries between intrepid adventurers, dreamers, and deranged fanatics blur inside a web of terror.

Praise For Cult of the Spider Queen: An Arkham Horror Novel…

"Superbly written, deftly plotted and imbued with an absolutely first-rate cast of characters that easily retain the reader’s attention until the very last page, Cult of the Spider Queen is a highly-polished and deeply impressive slice of Jazz-Era horror, with Sidor demonstrating his rapidly-increasingly skills and talents as an author, as well as his innate understanding of both the Arkham Horror setting and Lovecraftian Horror in general."
— Sci-Fi and Fantasy Reviewer

"All in all though the novel is a fantastic creepy (and crawly) read. It builds the perfect balance of tension and suspense while keeping you intrigued and wanting more. A must read for fans of horror, cosmic horror,  rip-roaring adventure, Lovecraftian inspired work or spiders in general!"
— What You Tolkien About

"You know how you go to horror movies and shout, "Don't go in that room!" Spider Queen makes you wonder why they went down that tributary, why they went on that warship that smelled bad, why they went into that shrine and on and on. But, it wouldn't be much of a horror story if all the characters thought things out. Don't go near that cave! Oh shoot, they did it anyway."
— Happy Horror Writer

"From the gloriously schlocky (in a good way) title to the exacting 1920s period details, “Cult of the Spider Queen” is a note-perfect, pulpy rollercoaster that reminds me of those weekly cinema serials back in the day such as “Flash Gordon” and King of the Rocketmen”, and it would be awesome if it was developed now for TV or a movie. This book is a must for horror fans and masochistic spider-haters alike."
— Kid Ferrous Reviews

S A SIDOR is the author of four dark crime thrillers and more recently two splendid supernatural-pulp adventures, Fury From the Tomb and The Beast of Nightfall Lodge. He lives near Chicago with his family.
Loading...
or support indie stores by buying on