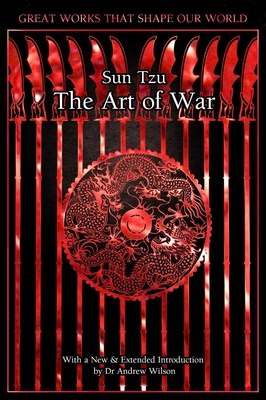 The Art of War has been a source of great strategical inspiration throughout the ages. Focusing on military strategy, psychology and tactics, each section concentrates on a different facet of warfare and draws out important themes such as communication, strength and positioning. Believed to have been written by Chinese strategist Sun Tzu, The Art of War is highly regarded amongst Chinese culture, but its enduring wisdom has had a far-reaching impact all over the world. FLAME TREE's Great Works That Shape Our World is a new series of definitive books drawing on ancient, medieval and modern writing. Offering a fund of essential knowledge, and spell-binding stories it satisfies every facet of human interest: scientific, philosophical, sociological, romantic, dramatic and mysterious. From the ancient wisdom of the Mahābhārata to the curious power of Don Quixote, Boccaccio's Decameron and Melville's classic Moby Dick, from the scientific wonders of Isaac Newton and Albert Einstein to the great thinkers of Western and Asian philosophy. Created to entertain, inform and enrich, the new series brings infinite variety to refresh the mind, presented in beautiful editions for the modern market. Each book features a new, accessible introduction, specially written for these editions, placing the book in context both as part of the new series, and highlighting its special contribution to the advancement of human understanding; they examine the significance of each work, their impact at time of publication, and their influence today.

Andrew R. Wilson (introduction) is a professor of Strategy & Policy at the U.S. Naval War College, where he teaches a mix of strategic theory and military history to help hone the critical analysis skills of military officers. In particular, he looks at how the classics of Chinese military thought, including Sun Tzu, have influenced Chinese strategic behaviour from the early Imperial period to the present. He received a PhD in History and East Asian Languages from Harvard University and taught Chinese history at Harvard and at Wellesley College prior to joining the Naval War College faculty in 1998, where he currently holds the John A. van Beuren Chair of Asia-Pacific Studies. The ancient Chinese military general, strategist and philosopher Sun Tzu was estimated to have been living between c. 544 and 496 BC. Also known under the names Sun Wu and Sunzi, Sun Tzu was widely recognised to be the author of The Art of War, an ancient and world-renowned Chinese military strategy book. A great influence on Chinese history and culture, Sun Tzu's beliefs are known through his writing and told through legend.
Loading...
or support indie stores by buying on