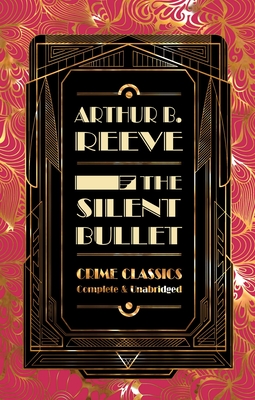 The FLAME TREE CRIME COLLECTABLE CLASSICS are chosen to create a delightful and timeless home library of classic crime and mystery thrillers. Each stunning unabridged edition features deluxe cover treatments, ribbon markers, luxury endpapers and gilded edges. The Silent Bullet (1910) is the first collection of Arthur B. Reeve's Craig Kennedy mysteries, initially published as part of a series in Cosmopolitan. In this collection of twelve tales of intrigue and suspense, readers are introduced to Kennedy, sometimes called the 'American Sherlock Holmes', and his friend and assistant, reporter Walter James. A professor at Columbia University, Kennedy uses his scientific expertise and inventions to solve cases, usually employing pioneering turn-of-the-century technology, such as hidden microphones, lie detectors, and a makeshift defibrillator. Full of thrilling escapades as well as insight into the discoveries of the early 1900s, The Silent Bullet is an adventure from start to finish. A specially commissioned biography of the author and a glossary of Victorian and Literary terms make this new edition essential for all classic crime fans.

Mystery writer, journalist and screenwriter Arthur Benjamin Reeve (1880-1936) was born in Brooklyn, New York and studied at Princeton and New York Law School. As a journalist, he covered some of the most infamous criminal trials of his time, including that of Bruno Hauptmann, the kidnapper of the Lindbergh baby. However, it was Reeve's foray into fiction that launched him to national fame, with the creation of his best-known character, scientist detective Professor Craig Kennedy. First published as a series in Cosmopolitan Magazine between 1910-1918, the adventures of Craig Kennedy were so popular that Reeves went on to write 26 novels featuring Kennedy, as well as short stories for numerous magazines. Judith John (glossary and biography) is a writer and editor specializing in literature and history. A former secondary school English Language and Literature teacher, she has subsequently worked as an editor on major educational projects, including English A: Literature for the Pearson International Baccalaureate series. Judith's major research interests include Romantic and Gothic literature, and Renaissance drama.
Loading...
or support indie stores by buying on