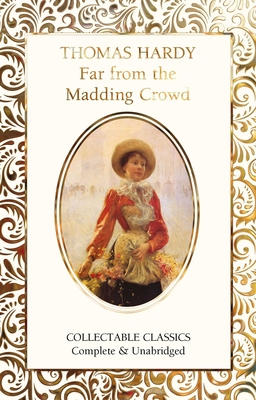 Far from the Madding Crowd

A stunning new edition with deluxe cover treatments, ribbon markers, luxury endpapers and gilded edges. The unabridged text is accompanied by a Glossary of Victorian and Literary terms produced for the modern reader. Thomas Hardy's perennially popular and oft-adapted fourth novel, Far from the Madding Crowd (1874), was also hugely successful in his day. Following the intertwining lives of its characters, we watch as independent and free-spirited Bathsheba Everdene makes various false starts with her infatuated neighbour William Boldwood and the dashing soldier Sergeant Troy (who is also involved with the tragic Fanny Robin), before finally accepting that her heart lies with faithful shepherd Gabriel Oak. It truly deserves its designation as one of the greatest love stories of all time. The FLAME TREE COLLECTABLE CLASSICS are chosen to create a delightful and timeless home library.

Thomas Hardy (1840-1928) was an English novelist and poet. Despite writing numerous successful novels in his lifetime Hardy primarily considered himself a poet. His first poetry collection was not published until 1898, however before this he received praise and some fame for novels including Far from the Madding Crowd (1874), The Mayor of Casterbridge (1886) and Tess of the d'Urbervilles (1891). Hardy's writing was greatly influenced by the Romantics, and in turn he was mentor to many young poets and was cited as an influence on Ezra Pound and W.H. Auden after his death. Judith John (glossary) is a writer and editor specializing in literature and history. She has worked as an editor on major educational projects, including English A: Literature for the Pearson International Baccalaureate series. Judith's major research interests include Romantic and Gothic literature, and Renaissance drama.
Loading...
or support indie stores by buying on